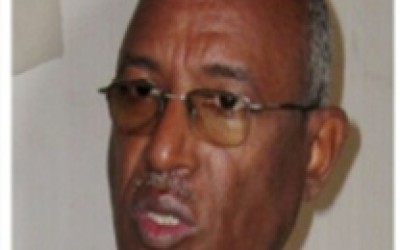 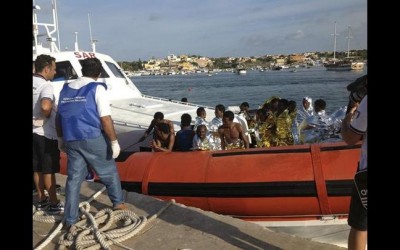 Khalid al-Amin  is one of the lucky ones who survived the treacherous journey. Last year on October 3, more than 300 Eritreans drowned when their boat sank off the Italian island of Lampedusa as they were trying to make their way to Europe.

He told Al Jazeera with the lack of basic rights and oppressive rule in Eritrea, he saw the risky journey across the Mediterranean as the only way out.

”As Eritreans we are dead regardless. We are doomed if we stay, and we risk death if we leave. Without freedom you are dead,” said Amin, 39, a refugee among thousands of Eritreans who embarked on the dangerous voyage across the sea.

He now resides in Sweden after he escaped to Libya via the Sudanese desert and then to Italy by boat.

”Dying is better than a life serving an authoritarian and dictatorial regime,” Amin said.

Eritrea is one of the most secretive and heavily surveilled countries. SMS is not allowed, and internet service providers must use state-owned infrastructure.

The country has no independent media. According to The Committee to Protect Journalists, 22 journalists were imprisoned in Eritrea as of December 2013, the fourth-largest number in the world.

Following a 30-year armed struggle for independence from Ethiopian rule, Eritrean rebels defeated the Ethiopian army in 1991. Formal independence was established in May 1993, when Eritreans overwhelmingly voted for statehood in a referendum supervised by the United Nations.

Isaias Afewerki has been the country’s only president since independence. Elections were supposed to be held in 2001, but were postponed with no new date set.

Afewerki’s government has created a militarised society with mandatory conscription into the national service – supposedly for only 18 months, but frequently extended indefinitely. Both male and female citizens from the age of 18 to 55 must complete compulsory service.

All conscripts must go to Sawa, a desert turned into a military base, where they must complete their high school education and military service.

Amin was part of the first wave of conscripts following independence in 1991. He was 18-years old when he joined the army and his military service lasted for 10 years.

”In the beginning it was great, I just wanted to serve my country and was very happy to be part of rebuilding the newly liberated Eritrea,” he said.

Gradually Amin said he felt he was serving the interest of the generals, rather than his country. According to Freedom House, an independent watchdog organisation, freedom of movement is tightly controlled.

Eritreans under the age of 50 are rarely given permission to go abroad, and those who try to travel without the correct documents face imprisonment. The authorities adopt a shoot-on-sight policy towards people found in locations deemed a no-go, especially close to the border.

”Many of the conscripts are used as forced labour for private and government projects,” she told Al Jazeera. ”There is no independent judiciary. Most people who are detained, whether they are conscripts or people accused of other crimes, are held in terrible conditions.”

Amin, now working as a care assistant in Sweden, painted a dark picture of life for conscripts, especially female ones. ”The female soldiers did everything we did. In addition they were forced to cook for the commanders, wash their clothes, and some were forced to have sex with them.”

He said if a woman refused to have sex with an officer, she would be accused of something she had not done and would be punished accordingly.

”Punishment would vary from having hands and legs tied to having ice-cold water poured over them several times in cold weather; be hung by a tree, or put inside a container under the blazing sun. In the worst case, death,” said Amin.

UNHCR estimates in the last few years, about 4,000 Eritreans have left the country every month.

Ibrahim Sherefay, 31, made it to Lyon, France. He endured harsh treatment at the hands of Libyans as he was caught there while trying to make it to Italy.

”I was put in jail for three months under inhumane conditions in Benghazi, where I was allowed fresh air for one hour during the day. After I was set free I went to Tripoli, and in my second attempt I made it to Italy by boat,” said Sherefay.

The alarming rate of Eritreans fleeing the country in recent years led the UN Human Rights Council to set up a commission of inquiry in June to investigate rights abuses in Eritrea.

Sheila Keetharuth, the council’s special rapporteur on human rights in Eritrea, told Al Jazeera there has been mounting documentation of human rights violations, such as arbitrary arrest, torture of prisoners, and indefinite military service with appalling conditions and forced labour for conscripts.

Salih Sabah, an Eritrean rights activist and a leading opposition figure who has resided in Sweden for 25 years, welcomed the UN investigation, but said it was more than 10 years too late.

”It is the first time for me to see an organisation from the UN criticising the Eritrean regime,” he said.

He accused the Eritrean government of pursuing a new form of ”modern day slavery” through military service, and keeping Eritreans in an ”open prison”.

Sabah said he  believes the commission was established now because the dire situation is embarrassing for the UN, and even the European Union because this is happening at ”the door steps of Europe”.

They told us that we are going to travel to Europe in a big boat, but we were shocked and surprised to see that it was a small fishing boat. We are very lucky to have survived.

”People are dying on a weekly basis, not all are covered by the media. We know of accidents that happen between Turkey and Cyprus and no one is reporting that,” Sabah said.

Though the UN inquiry has been seen as a positive step, questions have been raised of its potential impact since the government has not given the commission permission to enter Eritrea.

”I have no access to the country; there is no cooperation from the Eritrean government with my mandate,” Keetharuth, the special rapporteur on human rights in Eritrea, said.

Al Jazeera sought comment from the Eritrean government through its embassy in Qatar, but requests were not answered.

Many Eritreans who flee the country undertake dangerous journeys through Libya, Egypt, and across the Mediterranean to reach Europe.

One of them is Idris Ali Salih Idris, 36, who arrived in southern Sweden two weeks ago.

He made it out of Sudan via Libya with the help of traffickers. It took him eight days by land to reach the Libyan desert.

”We didn’t have enough water, we lived on crackers and some juice. Once we reached Libya, we were met there by the traffickers. They treated us harshly. They moved us into a smaller car and they took most of our belongings away from us,”  Idris said.

”They told us that we are going to travel to Europe in a big boat, but we were shocked and surprised to see that it was a small fishing boat. We are very lucky to have survived.”