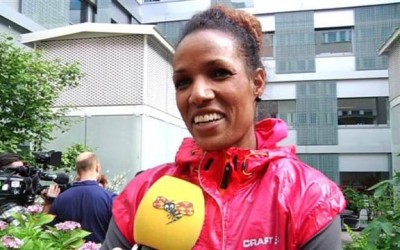 Swedish Championship gold medalist Meraf Bahta fled his native Eritrea when she suddenly called to military service. SVT’s program Skavlan says long-distance runner on the first impressions of Sweden – and gratitude towards his new family.
– Without them I would not have lived here now, says Bahta.

She is Sweden’s fastest woman in the 5000 meters and the newly appointed European Championship gold medalist over the distance.

But long before Bahta became a Swedish citizen in 2013, she began in her löparkarriär in Eritrea, where she grew up. In Friday night’s episode of SVT programs Skavlan tells löparstjärnan when her talent was first discovered.

– I started running in school. But really, I was not interested in running. My teacher forced me to run many times. Then he told my parents that I have talent but I do not like to run. One time I competed in the school against a very good girl. She was the best in school. She said: ”You can not run away from me.” Then I was angry. Why did she say so? So I ran past her, saying Bahta.
”Could not live my life”

The road to a Swedish citizenship has been long for Meraf Bahta. After having been rejected last summer Bahta could not compete in the World Championships in Moscow. But four months later, the day before Christmas Eve, the Migration Board changed its view – and granted citizenship.

Before that Bahta left his native Eritrea when she suddenly called into military service in 2009.

– I could not live my life. And I could not keep running as I do now, says Bahta.
”Very nervous”

She found a cheap flight to Sweden and ended up in a refugee camp in Älvsbyn in Norrbotten – in the middle of the Swedish winter.

– I had never seen snow before in my entire life. It was very cold, dark and freezing temperatures. It was the night the whole day. I thought, ”how can I live here? ’. I never saw any people on the street. It very nervous, she says in the program Skavlan.

After a time, took the Swedish Athletic Association contact Bahta he now calls his ”Swedish dad” – Ulf Björklund – who along with wife Bodil received Bahta on the Kode north of Gothenburg. There she was able to continue practicing running.

– It meant so much to me. I forgot my problems for a little awhile. I met many new people and teammates, and could talk about other things, she says.

Today she lives with continued with his Swedish family and a Swedish coach.

– Without them I would not be living here now. They mean a lot to me, says Bahta.