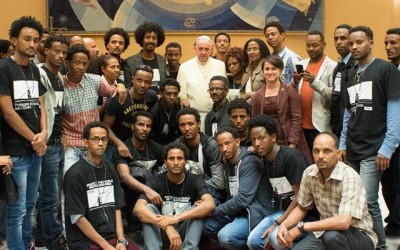 Any views expressed in this article are those of the author and not of Thomson Reuters Foundation.

LAMPEDUSA ISLAND, Italy, October 3 (UNHCR) – Almost a year after she nearly lost her life off the tiny Italian island of Lampedusa, Letebrhane from Eritrea will overcome her fear of the sea and return to remember the thousands who have lost their lives trying to reach Europe across the Mediterranean on smugglers’ boats.

The 24-year-old said she never wanted to see the sea again after the old boat she had boarded in Libya sank within sight of Lampedusa on October 3, 2013, leaving 368 people dead and just 155 survivors.

”When I heard about the possibility to return to Lampedusa for the commemoration, I was afraid and all the images I had in my head suddenly came back,” said the young woman, who now lives as a registered refugee in Norway. She was referring to an official ceremony to take place Friday on Italy’s southernmost territory.

”I never wanted to see the sea again. Then I realized how important it was for me to be there. I thank God because, to me, surviving October 3 was like being born a second time.” She will attend tomorrow’s commemoration in Lampedusa with other survivors. The group had a private audience with Pope Francis in Rome on Wednesday.

Letebrhane had left Eritrea in 2012 to escape compulsory military service in Eritrea. She could not even say goodbye to her family for fear they would be too worried. Only her best friend, Senait, travelled with her, and together they hoped to reach Europe and safety.

It took the pair one-and-a-half years to reach the coast of Libya, after crossing Sudan and travelling through the Sahara on crowded pick-ups, sold from smuggler to smuggler along the way. Letebrhane said they were frequently threatened and beaten en route; many women were sexually abused. Some of their travel companions died of thirst and exhaustion.

After surviving these ordeals and reaching Libya, they decided they could never go back the way they had come. ”I knew the sea [journey to Europe] was dangerous, I had heard many terrible stories, but I had no other way. There was nowhere else to go,” Letebrhane stressed.

She added that before the boat left, she and Senait were locked in a building in a remote area with scores of other people until there were enough for a boatload. Conditions were terrible and they had barely enough to eat.

The two Eritrean friends boarded the smuggling boat near Tripoli on October 2, 2013. After 24 hours at sea, they finally saw the lights of Lampedusa at four in the morning. They were close enough to see moving car headlights.

Then someone lit a blanket to try and attract the attention of other boats nearby. But this sparked panic on board, Letebrhane recalled, and people rushed to one side to escape the flames, causing the vessel to take on water and founder.

Most of those who survived were on deck, while many women and children were below water and could not escape in time. Letebrhane said she held onto the boat, only letting go when it sank beneath the waves on its deadly and tragic journey to the bottom. Senait was among the dead.

The scale of the disaster stunned the Italian nation and made headlines worldwide. There was great mourning and anger on Lampedusa at the failure to address the mounting number of crossings from North Africa and the attendant dangers.

As a result of this tragedy and a second sinking that left 268 Syrian refugees dead on October 11, the Italian government launched its ”Mare Nostrum” operation, which has since saved more than 140,000 people to date.

But the sea crossings continue and the number of people losing their lives rises. Since that fateful day one year ago, more than 3,600 have died or gone missing in the crossing, many of them refugees fleeing from war and persecution.

UNHCR has urged European states to provide legal alternatives to the irregular crossings and thus help save lives. Letebrhane, meanwhile, will be back in Lampedusa tomorrow, happy to be alive but devastated for those lost at sea.