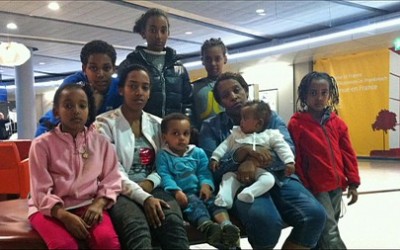 Wednesday 12 March was Simret Wolbgeber and the children sent out from Ulsteinvik to France. Where was the government did not live in the family was so great. Thus, the 9 overnight at the airport in a whole week .

In summer came Simret Wolbgeber Ulstein together with their children . The minimum BORNET was born in Sunnmøre. The woman is so-called Dublin because she was first registered fingerprint in France before coming to Norway. Wednesday last week was the family names from Ulstein and the following day on a plane to France. But there was no ready to welcome families with small children . For eight days they have to sleep on the chairs at the airport Charles de Gaulle.

– To sit as many days at an airport with eight children , is inhuman . It is outrageous , however , says Ranveig Kaldhol , deacon of Ulstein.

The youngest child is four months old days . During the second is 2.6 , 8,10,12 , 14 and 15 years. Her husband should be imprisoned in his home country, after the deacon has been informed .

Kaldhol trying now to help the family from Eritrea , which she has had much contact with the children’s choir and parish work in recent months.

– They ask for help at the airport, but get told that Norway had not stated that there was so many , says Kaldhol.

She is critical that such is not cleared in advance and think it is wrong to send a åttebarnsmor out of the country if it is not laid a plan for every family should live . She understands that the law must be followed and that the woman is not entitled to stay in Norway.

– People who are sent out must have a worthy reception of the country they come to , and a roof over his head , says the deacon .

– They have not done anything wrong . They have tried to come away from a country in chaos , says deacon . .
The bishop responds

Also bishop of Møre , Ingeborg Midttømme , engages in the case. She think it’s strange that the Norwegian authorities do not ensure how a family with children they send out, the host received .

– It is unworthy to sit on an airport with an infant and seven other children day in and day out , says Midttømme .

She believes that Norway has a responsibility in this matter , as they will ensure the quality of the situation before they send the asylum seeker back to the first country . The bishop believes that there should be a difference between the return of a lonely person and a family of eight.

Sent back to Norway

Midttømme expect the Norwegian authorities make contact with France to find a solution .

– If they can not accommodate the family , women and children being sent back to Norway until things are clarified. There is nothing in the way that Norway can choose to process her application , even if it was first registered in France , says Midttømme.

She believes the government must take the Dublin II up to the new debate.

Police say Immigration Service confirms that they have deported and handed over to a family of nine persons to the French authorities and that the family was accepted by France .

– This means that the en France is in charge of the family after the chores French authorities are bound by the Dublin cooperation , says deputy director Geir Bang Danielsen .

He says that the Dublin II regulates, among other things, what countries within the Schengen agreement which is responsible for processing a person ’s application for asylum.

– The aim is to ensure that an asylum seeker get his application processed . At the same time ensure that no one travels from country to country and apply for asylum in several Schengen countries , he says. 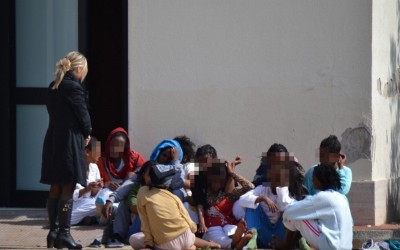 Syracuse , the flight of twenty girls in pajamas Eritrean

A group of twenty Eritrean girls aged 12 to 16 years he tried to escape from the house of Don Orione acceptance of Floridia . They were still in their pajamas when they were reached by the volunteers in the countryside and the highway connecting the small town to Syracuse. Some of them are still unable to escape : ”We can not do anything about it , sometimes it’s inevitable ,” explain the volunteers who prefer to remain anonymous . ”Because ours is an emergency facility and we have no political behind . And we are also criticized by Save the Children just because this is a nursing home with elderly and disabled . ”

With the increasing number of landings of these days, more will come tomorrow at Augusta 1505 in Syracuse are several emergency facilities that house these days unaccompanied minors . Not only in Floridia , but also in Canicattini Bagni , Priolo and Pachino . The Palajonio Augusta was instead temporarily closed for pest control.

The Eritrean girls do not just re-entered the structure they wrote on Facebook to their families. With them was the little Mamuk , 11 years old , arrived at Augusta on 30 January and again in search of a place : ” I love to play football ,” said the boy , nicknamed for its liveliness the ”Toto Riina ” the structure. Now Mamouk after having been for a month to Palajonio spends his days here . Among the disabled, elderly and young Eritrean girls who will soon leave the post to other unfortunate children .