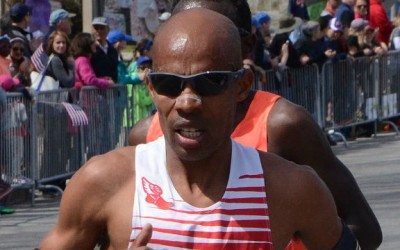 The 39-year-old runner won in Boston in April, on the first anniversary of the bombing that killed three people and injured nearly 300 at the prestigious race. He was the first American in 31 years to win the race.

Keflezighi and his family immigrated to the United States as refugees from Eritrea in 1987, when he was 12 years old. He won both the 1,600-meter and 3,200-meter races at the CIF California State Championship while at San Diego High School.

According to a statement from the Holiday Bowl, “the honor is awarded each year to an individual who has contributed to San Diego sports and society in a meaningful way.”

Keflezighi is the only athlete in history to win the New York City Marathon, the Boston Marathon and an Olympic medal.

A 1998 graduate of UCLA, his list of accomplishments also includes four NCAA championships, 22 national championships and membership on three U.S. Olympic teams. He won the silver medal in the marathon in the 2004 Olympic Games in Athens, Greece.

Last month, the Mission Hills resident earned the Jesse Owens Award as the USA Track & Field Athlete of the Year for 2014.

The parade begins at 3 p.m. Friday along the downtown waterfront. The football game, pitting the Nebraska Cornhuskers against the USC Trojan, will kick off at 5 p.m. Saturday at Qualcomm Stadium.