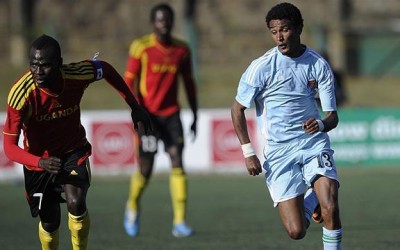 Natives of the small African nation of Eritrea reportedly try to escape from the Red Sea state every year, with many losing their lives making perilous sea-crossings in a desperate bid to reach Europe.

Sport, however, appears to offer a more viable escape route for many of them with numerous instances of national football squad members claiming asylum after competing abroad.

In late 2012, one squad went missing after going shopping ahead of their scheduled return home to Eritrea, whose human rights record is considered to be very poor.

The BBC reported last year that Uganda had granted them asylum and, according to the AD newspaper in Holland, they hung around Kampala for a while before ending up in the riverside town east of Rotterdam by the way of Romania.

Arie van Hoven, of the local food bank, told the paper the group had a terrible journey to get there.

“They arrived with almost nothing. We’ve been looking for furniture and mattresses for them.”

Gorinchem’s mayor Anton Barske told RTL news the group are terrified that something may happen to their families and want to avoid publicity.

He said the group was invited to the Netherlands by the Dutch government when they were in Romania and had already started learning Dutch while in the eastern European country.

“They wanted to stay together as a group and that was possible here,” he said.

“They are going to integrate and need an education. Then they will be able to build a new life.”

18 months prior to the absconding in Uganda, 13 players from an Eritrean club side sought refuge in Tanzania. In 2009, a dozen members of the national team disappeared in Kenya. 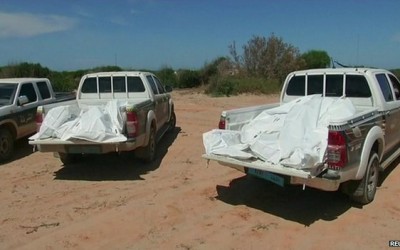 At least 36 migrants drowned when their boat sank off the Libyan coast earlier this week, officials said, following the recovery of more bodies on Sunday.

The navy said it rescued 52 people when the boat sank on Tuesday, but survivors say there were 130 people on board.

On Saturday Libya’s interior minister urged the European Union (EU) to do more to help stem the flow of migrants.

Libya is the preferred crossing point for many African migrants trying to enter the EU.

Libyan navy spokesman Ayoub Kassem told the BBC that the boat capsized about 4km (2.5 miles) out to sea near the Libyan coastal town of Garabouli.

The bottom of the boat had collapsed, causing it to capsize, he said. At least 54 people remain missing, he added.

On Sunday 24 more bodies were recovered from the sea near Garabouli, bringing the death toll to 36.

Mr Kassem added that the migrants were from various sub-Saharan African countries including Mali, Cameroon, Ghana, Gambia and Burkina Faso.

The search continues for the remaining passengers.

Interior Minister Saleh Mazek said on Saturday that Libya could not cope with the amount of migrants arriving from sub-Saharan Africa.

He warned the EU that if it did not ”shoulder its responsibility”, then Libya may help the migrants to reach Europe.

The Libyan government has since issued a statement saying that it would continue to co-operate with all partners in order to stop illegal immigration.

Libya has been plagued by instability since armed groups toppled Muammar Gaddafi’s regime in 2011.