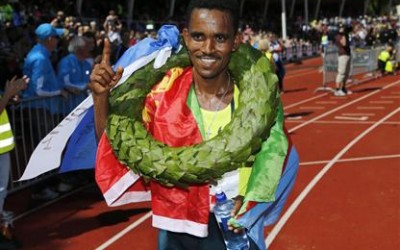 18 -year-old Ghirmay Ghebreselassie from Eritrea was the first man to cross the finish line in the 35th edition of Gothenburg shipyard at time 1:00:36 . He received the people’s jubilation as the youngest winner ever. (TT)

18 -year-old Ghirmay Ghebreselassie from Eritrea was the first man to cross the finish line in Gothenburg shipyard at time 1:00:36. He ran alone into Slottsskogsvallen and received the people’s jubilation as the youngest winner ever in the event’s 35 -year history.

In the women’s class won Worknesh Degefa from Ethiopia at the time 1:10:12. She pulled early from their competitors and could run into the winner twelve seconds ahead of second and countrywoman Tadelesh Bekele Alemu.

Any thought at first that the winner had set a new track record in Gothenburg shipyard by three seconds. But it turned out to be wrong. A technical error had slipped in and all the first 200 runners cross the finish line will receive a supplement of 14 seconds.
I have no precise explanation. It was a glitch, and was due at the start of the elite group. All others get real times. We have manual backup times and when we checked them we realized that they were not consistent, says Per Crona, director of elite runners.

Dear Swedish became Johan Larsson, contestants for Stromstad at time 1:05:58, which was enough for 15th place. Best Swedish became Emma Nordling at time 1:17:37, which gave a seventh place among the ladies and 70th overall.

The favorite Viktor Kipchirchir had lost contact with the lead pack , which consisted of a quartet including Ghirmay Ghebreselassie , already at five kilometers. Eritrea released a bit back to the forefront after a mil , but quickly came back . From 15 km increased Ghebreselassie distance gradually runner Richard Mengich, Kenya. Abraham Kiplimo, Uganda, was third.

64,000 notified elite runners and athletes from 48 nations gathered in Slottskogen to participate in the world’s biggest half marathon.