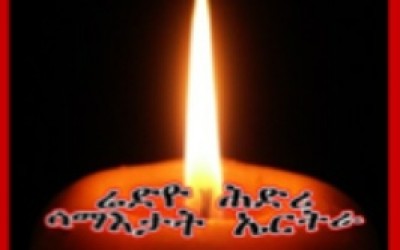 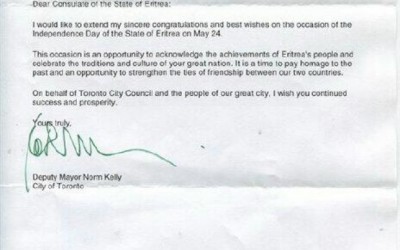 Canadians are urged not to go to Eritrea. The Canadian ambassador to Eritrea is not even in Eritrea, but a diplomatic outpost in Khartoum, Sudan. Likewise, the Eritrean diplomat has been previously kicked out of Canada.

Relations between the two countries are strained. Eritrea has a similarly limited relationship with European countries and the United States.

But at least one Canadian leader is celebrating the conflict-prone state in the Horn of Africa. Deputy Mayor Norm Kelly is sending his best wishes to the African nation of Eritrea on Saturday, May 24, the 23rd anniversary of the country’s independence.

In a letter addressed to the Consulate of the State of Eritrea, Kelly celebrates the ”friendship” between Canada and Eritrea. ”This occasion is an opportunity to acknowledge the achievements of the Eritrea’s people and celebrate the traditions and culture of your great nation,” he writes.

Eritrea is one of the poorest nations in Africa, yet Canada does not provide humanitarian aid to it. It rates 160th of 200 countries on the UN gross domestic product index.

Eritrea gained independence from Ethiopia in 1991, and was officially became a nation in 1993, though the struggle for independence lasted decades before in armed conflict.

In the short time it has been a nation, it has seen several wars, economic sanctions, and human rights and freedom of the press complaints.

Ahmed Iman, head of consular affairs in the Eritrean embassy in Canada, made an Independence Day speech on May 18, in which he referred to criticisms of his government as ”external conspiracies.”

Kelly did not comment when asked about the appropriateness of the letter. 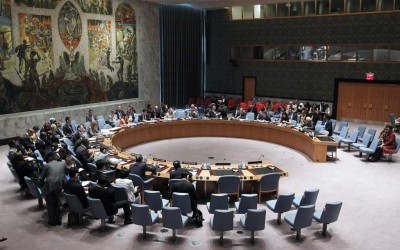 Eritrea must immediately release thousands of prisoners held without charge or contact with the outside world, including the Swedish -Eritrean journalist Dawit Isaak. It demanded on Tuesday the UN rapporteur for human rights in Eritrea.

UN rapporteur for human rights in Eritrea , Sheila Keetharuth , urged on Tuesday in strong terms the Eritrean government to release prisoners held in secret detention centers around the country. Most are believed to live in dreadful conditions without contact with the outside world, and subjected to regular torture and starvation. Very few have been prosecuted.

One of Eritrea’s many prisoners , the Swedish – Eritrean journalist Dawit Isaak and father of three who was arrested at his home in Eritrea in 2001. Since then, no one knows where he is or what his condition is. The Swedish government’s attempts to free him with quiet diplomacy seems to have led nowhere.

– I urge the Eritrean authorities to release immediately, prosecute or bring to justice all prisoners, including journalists who were arrested in 2001 as well as those who are imprisoned for their opinions or religious beliefs, says Sheila Keetharuth.

UN rapporteur estimates that there are about 10 000 political prisoners in Eritrea, and 28 journalists are still imprisoned. Nine journalists and nine politicians have died in captivity of torture, ill-treatment and lack of medicines, according to International PEN that is engaged in issues of free speech.

UN Rapporteur is particularly concerned about how the prisoners in secret detention centers treated.

”Prisoners are held incommunicado and at risk widespread torture”

– They are at high risk of torture and ill-treatment. The authorities must say where they are and give them access to their families, physicians, and legal representatives, says Keetharuth.

She welcomes, however, that eight prisoners should have been released in April of this year, data coming from human rights organizations, but has not been confirmed by the Eritrean government.

– Their release is a positive development, which I hope will be followed by more systematic releases. Eritrea must comply with their international legal obligations much better, stresses UN rapporteur.

It’s not the first time that Keetharuth condemns Eritrea and its arbitrary detentions, massive repression and persecution of dissidents. Her report on the human rights situation that was presented last spring was very stiff, and a second report is expected in June this year. But do these harsh statements and condemnations from the UN Eritrea reporter a difference?

– It keeps up the pressure, and exercise a sort of soft moral power. Eventually, things will change. Just look at what happened with, for example Burma. We hope the same thing, for example, North Korea and Eritrea says Xabier Celaya at the UN human rights office in Geneva.