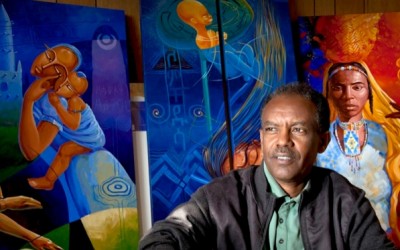 When a boat carrying 500 asylum seekers sank off the Italian island of Lampedusa, it moved Michael Adonai to create the works featured in his Altona exhibition titled I did not choose to be a refugee.

Eritrea-born Adonai is a winner of his country’s top art prize. He has exhibited internationally, including at a United Nations-sponsored global art show in New York.

In 1977, aged 15, Adonai joined the Eritrean People’s Liberation Front. Much of his early work centres on his experiences of war.

Adonai, who lives in Werribee, said that his latest works paid tribute to the 359 asylum seekers who died in the sea on October 3.

“In particular, the exhibition pays homage to an Eritrean woman, seven months pregnant, who prematurely gave birth to a baby boy while drowning.

”When rescue divers pulled them from the sea bed, the mother and baby were still connected by the umbilical cord.”

Adonai’s exhibition will be at Altona’s Joel Gallery from June 14-27. The Louis Joel Arts and Community Centre is $1000 shy of the funds needed to frame Adonai’s pieces.

“He has had exhibitions in New York, Washington and several European countries,” she said.

“We are so proud to have this exhibition in Altona.

“So far, the centre has received two lots of funding totalling $1500. We need another $1000 to enable all his work to be framed to a high standard.”

The exhibition is supported by Hobsons Bay council and Multicultural Arts Victoria. Adonai now works with Wyndham council to share his skills with aspiring young artists. 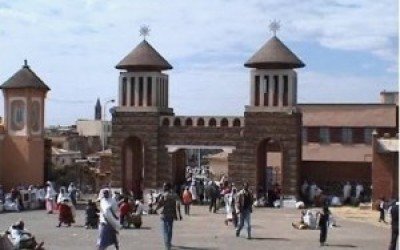 Eritrea is again persecuting even officially recognised religious bodies with the arrest last week of five Christians set to be ordained in the Evangelical Lutheran Church, according to Open Doors.

The Christian support organisation announced that security officials in the capital, Asmara, arrested Petros Yosief, Bemnet Tesfay, Aklilu Tesfay, Ermias Hadgu and Aron Mehretu. The arrests came shortly after the church announced on April 20 that they would be ordained for pastoral ministry.

“The arrests clearly show how even government recognised churches, namely the Catholic, [Eritrean] Orthodox [Church] and Evangelical Lutheran churches, are not free from government control,” said an Open Doors source on condition of anonymity.

Authorities in Eritrea, where an estimated 1,500 Christians are languishing in prison for their faith, are holding the would-be Evangelical Lutheran leaders at Police Station Number 2 in Asmara, according to an Open Doors press statement.

“The arrest of these pastoral candidates reminds us of one of the greatest challenges churches in Eritrea face,” said an Open Doors worker. “Due to the constant turnover of pastors due to arrest or threats, continuous and biblically consistent pastoral care for Christians is hampered.”

In 2005, Eritrean authorities cracked down on the officially recognised Eritrean Orthodox Church (EOC), persecuting those who supported a renewal movement within the church and who protested religious persecution. When Patriarch Abune Antonios, head of the EOC, objected to the persecution, Eritrean President Isaias Afwerki arranged for him to be deposed, placed under house arrest and ultimately replaced by a government official.

It was the EOC that had reportedly urged the government to crack down on the other religions in the first place, resulting in making all other religious bodies outside of the four who registered in May 2002 illegal.

“Since then, many thousands of mostly evangelical Christians have suffered severely at the hands of a regime known for its human rights abuses, appalling prison conditions and widespread use of torture,” writes Elizabeth Kendal of the Religious Liberty Prayer Bulletin. “Even teenagers are not spared and must complete military service in military training camps before they can graduate from school. Separated from their parents, religious persecution in these camps is systematic and severe.”

At its worst point, persecution in Eritrea resulted in an estimated 3,000 Christians incarcerated for their faith by the end of 2010, with most held in shipping containers in desert camps and others in underground cells, Kendal writes.

“The conditions are inhumane: Children and the elderly are amongst the prisoners sharing skin diseases, dysentery and other horrors in confined, unventilated spaces,” she notes. “Torture is routine. Amnesty International has reported on the tortures suffered by Christian prisoners. Several Christians have died in custody and others have perished in the desert trying to escape.”

In 2010, the U.S. Department of State estimated 50 percent of the Eritrean population was Muslim and about 48 percent Christian; the Pew Research Center, however, estimated at that time that nearly 63 percent were Christian and 36.2 percent Muslim.