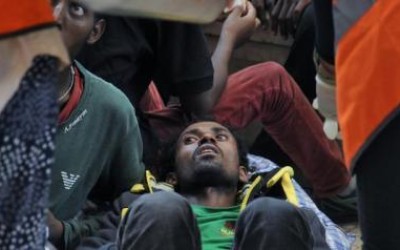 A regime of terror. This is described by the UN Eritrea, whose commission of inquiry has openly denounced the practice of crimes against humanity. Often, we see them coming to our shores in boats of death without knowing where and what escaping thousands of people in Africa. Among these desperate people, human beings like us, the High Commission estimated that in 2015 only the Eritrean refugees have reached the figure of 400,000.

There is, unfortunately, little attention on this part of the world around the Horn of Africa where it is consumed, for years now, an unbearable chain of crimes against the state of law and the people. We want to shake the conscience and arouse the attention because this country we care and we want to fight for the restoration, meanwhile, certain minimum conditions of political freedom and civil life completely erased from the absolute and tyrannical power of President Isaias Afewerki. He repeated it recently Renzi. We repeat us again: Africa is our priority and Eritrea is fully part in this action that can and must relate to the European Union. We are raising the issue of a country that, to keep the investigations of the United Nations High Commissioner for Refugees estimates that over 400 thousand Eritreans, equal to 9% of the total population, have fled the country, and every month about five thousand people the abandon. A continuous flight, incessant, largely due to the persistence of serious violations of human rights.

In the European Union, last year, Eritrean asylum seekers have been granted refugee status in 69% of cases, while a further 27% received subsidiary protection. The European Parliament has approved in the last session in Strasbourg, a resolution that is a sort of compendium of the atrocities that are committed in Eritrea. Many, especially young people, cross the border and the regime takes revenge on their families back home by imposing on them a heavy fine, a real extortion. Imposition in violation of UN resolutions ”used to finance armed groups in neighboring countries, destabilizing the region” in doing so.

This is the framework within which takes place the lives of six million and a half inhabitants, the home of the co-signatory of this writing, Don Mussie Zerai, the cleric who since 1995 has lent the work of assistance to all our compatriots who have crossed the Mediterranean towards a European land of salvation and that for this reason it has been proposed for the Nobel.

When it comes to repressive regimes the list of misdeeds is always long and terrible. After the ”presidential” that led to power Isaias Afewerki has been fulfilled a suspension of democratic rights, no application of the Constitution of 1997, replacing the judiciary with Special Courts, starting a mass conscription and lasting for hundreds of thousands of soldiers. A conscription that has been perpetuated over the years and which also covers men of 50-60 years. This structure allows the regime of the president to use the armed forces as well as workers at no cost to public works or caste in power interest. Those who could and can still leave this hell, this prison-State so that the figures say that 7/8 of an Eritrean now lives abroad. He flees from Asmara and surroundings to escape the repression and the economic and social conditions absolutely catastrophic. Eritrea is now one of the world’s poorest countries with a per capita GDP of $ 800 per year, not even $ 70 per month. A good portion of the residents survive on remittances from expatriates, which was one of the most significant items of the national economy affected by the prolonged drought and in general by climate change that could result in a new exodus of refugees from what Human Rights Watch has called one of the most ferocious dictatorships in the world that can boast of, so to speak, well 361 between prisons and detention centers (in Italy, with 60 million inhabitants, there are 205 prisons). In our country landed last year more than 150,000 refugees. 26% of these, amounting to 40 000, are Eritreans, and young age. Escapes those who have more strength and will to fight in the hope of being successful.

The relationship between the EU and Eritrea, is based on a partnership agreement that lasts for years and even on assistance programs for some time but the opposition forces are demanding that Europe and even individual EU countries cease to cultivate the idea that the Afewerki regime can be held good with acts of blandishments in return for an easing of the climate of lawlessness. This is not the road that could lead to a return of civil and democratic normality. The European Parliament called for an end to all violent practices in the field of military service and access to the country of UN experts and the OAU to initiate an investigation of violation of human rights. It is the most important act that you have to play. That essential in carrying on to secure all fundamental rights as well as the same structure of the state affected in the operation and governance practices.

The Parliament, in fact, calls on the government of Asmara restoring a correct and transparent management of public finances, the launch of a true national budget and the autonomy of the central bank, free from military control and free from hazardous trades on terrorist financing in the area. The Habesha Agency also calls for the opening of a peace table between Eritrea and Ethiopia, the two neighboring countries that have been dragging since 1998 in an exhausting war fought on the field but equally deadly.

The end of the clash between Asmara and Addis Ababa could also wipe out the emergency climate and strong current repression in Eritrea justified by the winds of war. The Afewerki regime has, in fact, always motivated prolonged crackdown and the total militarization of the country with the condition continues hostility to Ethiopia. Regarding this aspect very sensitive, on behalf of the Socialists and Democrats Group, I will travel to Ethiopia to invite the Addis Ababa government to work towards a peaceful solution that would stabilize not only the two countries but the whole region Horn of Africa.