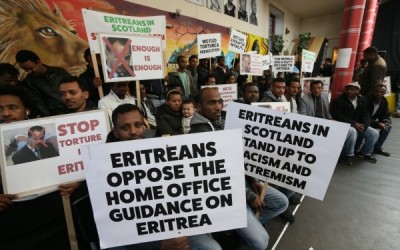 CARRYING banners denouncing the regime which drove them from their country, Scotland’s Eritrean community turned out in force at a major rally on Saturday, March 19.

Attended by at least 2,000 people, the Stand Up To Racism event was a show of solidarity with refugees.

Most of the Eritreans present were refugees themselves, with many waiting for their cases to move through the UK asylum system – a system which claims their home nation is safe and improving and advises rejected applicants to return.

Yet figures released last month show Eritreans make up the UK’s largest number of asylum applicants, with 3,729 seeking sanctuary in 2014.

Support group, Eritrean Community Residing in Scotland (ECRS), now wants to change that and is asking Scots to back them and put pressure on the Home Office to rewrite its rules on Eritrea – a country of about 6 million, which has been ruled by one man since 1993, where political opposition is banned and, although no war is being fought, military service runs indefinitely.

ECRS chairman Teklom Gebreindrias told The National: “You can’t describe the situation there with human language. People compare Eritrea with North Korea, but it’s worse – it’s the difference from sky to ground.

“Here, healthcare and education are free, in Eritrea — prison is free.”

Tedros Bitsay, 30, arrived in the UK from Calais in December 2014, one of 10 people who stowed away on a lorry. The driver found them at Leicester and called the police.

After a three-day stay in Yarl’s Wood detention centre, the former science student was moved to the now-demolished Red Road Flats in Glasgow.

Asylum seekers were the last inhabitants of the controversial high rises and Bitsay has now been placed in Easterhouse, where he has found a volunteering role.

“I like it” he said. “Some people see you from afar and they think ‘is he bad, is he strange?’ but when they know you, they like you.

“We don’t want trouble, we are looking for peace.“

Bitsay’s first detention lasted two years without communications with his family. After release, he was sent for a year’s military training in what he calls the “worst place” in the country.

Even so, he says life in the UK asylum system feels like another detention. “I’ve been waiting without any feedback for 14 months,” he said. “I have to live, I have to make a family and all the things people want.

“I love my mum, I love my country, but I choose to die here. I cannot go back.”

Humed Saleh Idris was 14 when he was taken into the military for armed training. He spent seven years in the army and was sent home to become a security agent, monitoring members of the public and carrying out arrests for the authorities. When he said no, he knew he would have to leave the country.

Idris was a newly-wed at the time, saying goodbye to his wife after their honeymoon. “It was simply the toughest decision I have had to make,” he said, “but I was at risk.

“If you reject anything the government asks you to do, you end up in detention.”

President Isaias Afwerki’s regime is accused of using arbitrary arrest and detention without charge to tackle any and all forms of dissent. Conditions breach international standards, with underground cells or metal shipping containers used to hold detainees.

Many are exposed to extreme temperatures in desert regions, and torture and other forms of ill-treatment are said to be common.

Idris, whose ordeal began when he was just a child, now aspires to become a news photographer and learn to drive, but his real ambition is simpler. “I want a life free from fear,” he said.

Daniel Kbrom has just days until a crucial hearing, which could determine his future in the UK. An estimated 5,000 people currently make it out of Eritrea every month and more unaccompanied child asylum seekers in the UK hail from there than anywhere else, a situation Kbrom calls “horrifying”.

“Eritrea is becoming impotent,” he said. “It’s a big brain drain and the country is losing all its human resources. It’s very saddening to see children unaccompanied in a country where they know nothing. To make matters worse, these children back home have no hope, no vision, no future.”

Kbrom was suspected of planning an unauthorised border crossing before he even considered it. An agricultural student in government-owned farmland near the border, he was talking with coursemates without permission when officials believed they were planning to take their chance against a shoot-on-site border policy.

After three months, they were released on the condition they guard the farmland, but Kbrom said he could not do the job, so had to leave.

“I want to live a decent life.”

In the first quarter of 2015, the refusal rate for Eriteans went from 14 per cent to 66 per cent after the UK Home Office updated its guidance after the UN dismissed a report. Officials say every case is taken on its own merits. 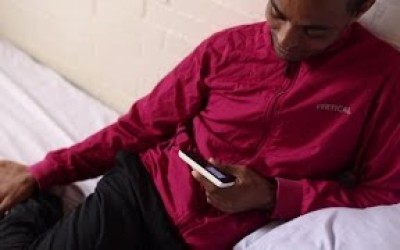 FROM ERITREA TO DENMARK: A PERILOUS JOURNEY CAPTURED ON A CELL PHONE

This Equal Times video, directed by journalists Romina Vinci and Ella Kiviniemi, captures these moments, through the incredible recorded evidence of Kidane Berhe, a courageous Eritrean refugee now living in Denmark. And it is brutal. Death, abuse, violence and fear are the common lot of asylum seekers at the hands of smugglers.