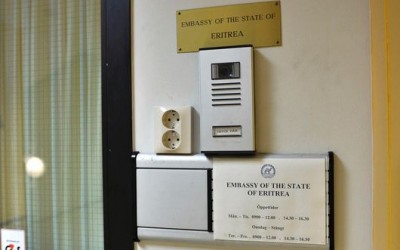 ”Reign of terror” during the expelled diplomat

The diplomat Eritrean Sweden expelled last week put fear in their fellow citizens in the Nordic region. Espionage, threats and blackmail forced them into submission, claims a defector in a unique testimony.

Nobody has ever told from the inside of the Eritrean embassy in Stockholm. But now describe a defector horrors Tekle Menghistu who was expelled last week.

– To spy on the opposition was his main task. He was very good at it – he is a high-ranking security officials, said Fidel Sium who worked closely diplomat from 2010 to 2013.

Tekle Menghistu must have had a spy network to control and suck out all Eritreans.

– Many helped him because they were afraid. Otherwise could relatives in Eritrea could get in trouble.

Central to the embassy is to require exiled Eritreans tax, for example, when someone needs a passport to apply for Swedish citizenship.

He himself was a co-organizer of an annual festival in Stockholm, where thousands of Eritreans from all over Scandinavia. The 5-6 million it grossed ended up in the pockets of Tekle Menghistu and some others at the embassy under Fidel Sium.

– Just next Yemane and his SAPO Guards had Tekle Menghistu and his associates pistols and a Kalashnikov! Fidel claim Sium.

If someone came in, he would be taken out and shot, the diplomat should have explained.

He also led the slander and intimidation against opposition. Enemy number one is the Swedish-Eritrean senator Arhe Hamednaca (S) according to Fidel Sium.

Full defection Arens history can not confirm, but that can be checked right. Many observers also believe in the story.

– It seems credible. The tax is required in the whole world and there are reports of threats and violence from several countries. Canada deported the Eritrean Consul on just the basics, says Eritrea expert Kjetil Tronvoll. 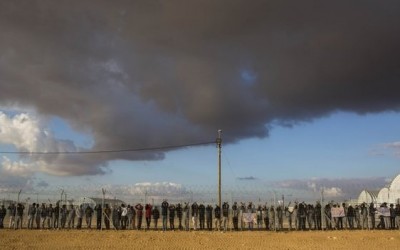 They have been denied access to fair and efficient asylum procedures and detained unlawfully, a new report says.

Israel says its policies on illegal immigrants and refugees comply with international law.

It insists that the Africans are not asylum seekers but economic migrants who see Israel as an attractive destination because it is the nearest developed country where they can find jobs.

Eritreans and Sudanese began arriving in Israel through Egypt’s Sinai Peninsula in large numbers in 2006. By December 2012, about 37,000 Eritreans and 14,000 Sudanese had entered the country.

HRW says that over the past eight years, the Israeli authorities have employed various measures to encourage them to leave.

They include ”indefinite detention, obstacles to accessing Israel’s asylum system, the rejection of 99.9% of Eritrean and Sudanese asylum claims, ambiguous policies on being allowed to work, and severely restricted access to healthcare”, it alleges.

In September 2013, the Israeli Supreme Court ruled that a 2012 amendment to an anti-infiltration law, which allowed for the indefinite detention of people for illegal entry, was unlawful.

In response, the Israeli parliament passed another amendment to the law in December that established the Holot facility in the remote Negev desert for those considered ”infiltrators”.

Hundreds of Eritreans and Sudanese have since been ordered to report to the centre, where they live in conditions that HRW says breach international law on arbitrary detention.

The Israeli authorities say they are not detained because they can leave for a few hours at a time. However, they are required to report three times a day and to be in the centre at night. The only way for them to secure their release is to be recognised as a refugee or leave the country.

In February 2013, Israel allowed Eritreans and Sudanese to lodge asylum claims in significant numbers. However, as of March 2014, the authorities had only reviewed slightly more than 450 ”detainee” cases, and the rejection rate has been almost 100%, HRW says.

”Destroying people’s hope of finding protection by forcing them into a corner and then claiming they are voluntarily leaving Israel is transparently abusive,” said Gerry Simpson, senior refugee researcher at Human Rights Watch and author of the report.

”Eritreans and Sudanese in Israel are left with the choice of living in fear of spending the rest of their days locked up in desert detention centres or of risking detention and abuse back home.”

HRW says Israel is violating the international principle of ”non-refoulement”, which forbids states from returning refugees and asylum seekers to places where their lives or freedom would be threatened.

In response to the report, the Israeli foreign ministry said: ”Israel treats illegal migrants entering its territory in accordance with international law, including the UN treaty on refugees.

”Illegal migrants are able to file a request to be granted the status of refugees, and can also appeal the decision by the Israeli authorities regarding their status to the Israeli courts,” it said.

Migrants had not been expelled, the statement said, adding that those who had left had chosen to do so ”of their own free will”.