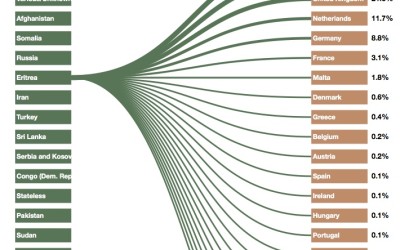 Refugee flows to the EU

There are 53,722 refugees from Eritrea in the EU. Here’s where they live.

Use the graphics above to explore where refugees in Europe live. Select a country of origin to see what EU countries people fled to.

These figures are for 2014 and show people that, according to the United Nations refugee agency (UNHCR), were granted refugee status that year or earlier. The numbers also include people in refugee-like situations.

”Various/Unknown” is used in cases where the UNCHR has not yet established a person’s nationality, or in cases where people lack the proper paperwork to prove a certain nationality and can be linked to several countries.

Thirdly, ”others” refers to the sum of refugees coming from countries other than the major countries of origin previously listed. Follow this link to view those figures in detail.