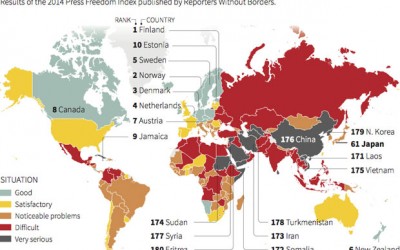 It’s easy to be cynical about the press. Bereft of a working business model, an array of media outlets chase clicks and aggregate snark in a survival-minded race to the bottom, while echo-chamber Internet reading habits allow for an insular insistence that one can, in fact, create one’s own facts. But while the integrity and quality of the world’s journalism must be self-policing, it is important to remember the governmental and institutional challenges that journalists face, both in the U.S. and around the world.

As this Reuters graphic shows, new rankings from Reporters Without Borders place the United States 49th of the 180 countries evaluated, just above Comoros but below Malta; slightly better than 53rd place Haiti, but not quite as good as 45th place El Salvador. Critics point to a continuing decline in press freedoms under President Obama, and the U.S. has fallen 29 places, from 20th since the report was inaugurated in 2009. “No fewer than eight whistleblowers, including Chelsea Manning, have been charged under the Espionage Act during Barack Obama’s two presidential terms, compared with just three under all the other administrations since its adoption in 1917,” the report noted.

Of the 21 countries that comprise the top of the index with a “Good” press situation, 16 were in Europe, although the report noted concerns about the sustainability of the “European model“. Eritrea came in at 180th place, for the second straight year, just behind North Korea. Saudi Arabia, Russia and Iran, the world’s top 3 oil producers, were ranked 164th, 152nd and 173rd, respectively.

The report noted that covering demonstrations is becoming more difficult world-wide, and cited the arrest of 15 journalists during protests in Ferguson, Missouri, as part of the reason for America’s decline in the rankings. Claims of blasphemy and sacrilege continue to serve as excuses for abuse; the report cited the example of Saudi Arabian blogger Raif Badawi, who was fined one million riyals ($266,000) and sentenced to 1000 lashes and 10 years in jail for running a discussion forum.

By Reuters: More highlights and lowlights can be found in the full report.