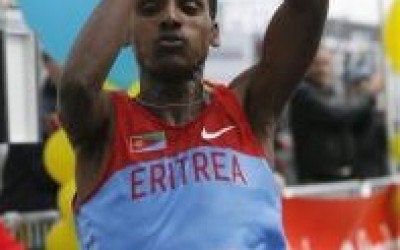 By 20km, passed in 1:00:43, the lead pack contained 10 runners. At 30km, with a split of 1:31:54), shortly after the pace makers left the course, there were still six runners in contention at the front: Estifanos, Uganda’s 2014 champion Abraham Kiplimo and the  Japanese quartet of Kadota, Yamamoto, Yusei Nakao and Satoshi Yoshii.

However, Estifanos soon started to increase the pace and Nakao and Yoshii were left behind.

The defending champion Kiplimo was the next to let go, leaving Estifanos, Kadota and Yamamoto to fight it out for the top spot on the podium.

Estiganos surged again after 32km; first Yamamoto and then, finally, Kadota had to let him go.

After 35km, Estifanos steadily slowed, taking 15:52 between 35km and 40km, but he still increased his advantage over his flagging pursuers and won by 28 seconds.

Estifanos became the first Eritrean to win the Beppu-Oita Marathon in its 64 years history and it continued his upward curve over the classic distance. It was the fourth straight personal best in as many marathons and his finishing position has also improved in those four races.

Kadota finished second with 2:10:46, nearly two minutes better than his previous best of 2:12:25, which was recorded in the 2012 Beppu-Oita Marathon.

Ken Nakamura for the IAAF