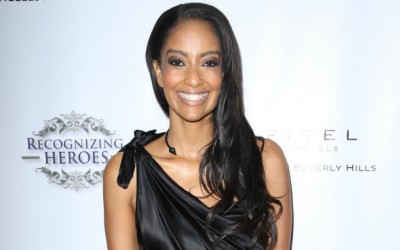 Azie Tesfai: How being from a third-world country helped me define myself

As many children are, Azie Tesfai was a picky eater growing up. Staring at the plate of food her mother would put in front of her at any given meal, little Azie would stubbornly insist, ”I don’t want anything.”

But then, something profoundly shifted Tesfai’s life: She went home.

You see, while Tesfai was born in America and was largely raised in Los Angeles by her mother, she is a first-generation immigrant whose family hails from the developing East African countries of Ethiopia and Eritrea — aside from a few other relatives living in the States, most of her family still resides there.

And around the age of 10, Tesfai traveled to her family’s homeland for the first time. To say it changed her would be an understatement.

”When I came back from Ethiopia, I never left anything on my plate,” she said. ”And to this day, I only take what I think I can eat and then I go back and get more — it’s really hard for me to leave food.”

This newfound mind-set ran much deeper than a preoccupation with food, of course. For Tesfai, it was about learning to appreciate what she had and be happier with less. In that respect, travel would become her greatest teacher.

Although she didn’t make her inaugural sojourn to East Africa until she was 10, Tesfai and her immediate family spent the rest of the young girl’s formative years bouncing between the first- and third-world countries.

Once, while visiting her family, Tesfai came across a group of children playing in a field. ”I remember asking my mom, ’Why are those kids playing with a rock?’ And my mom was like, ’No, it’s a soccer ball. It’s just been worn and used by them so much.’ You know, it’s like 15 kids and one ball,” she said.

So Tesfai and her mom decided to surprise them with a new soccer ball. ”My mom took me to buy them one, and you would think they were given pure gold, based off their excitement,” she remembered. ”They stayed out playing until really late that night, and they were just so happy.”

It was a notion particularly jarring to the young girl from Southern California. ”I thought, ’Oh, wow, my friends in LA have so much more and they’re so miserable,'” she explained. ”So I was really lucky to have that lesson at a really young age.”

It’s not being sheltered from those realities that Tesfai credits with changing her perception and helping to shape the person she is today.

”Once you see things, I always say, you can’t unsee them,” she said. ”Once your heart opens to something, you can’t reclose it, right? So the exposure of it is what really changes people.”

These days, it would be easy for Tesfai to get swept up in a life of glamour and excess. As Nadine on the CW’s Golden Globe-winning Jane the Virgin, Tesfai is part of one of the hottest shows on television.

Still, she carries East Africa in her heart to keep herself grounded, continuing to split her time between her home base in LA and her homeland. It’s the beautiful dichotomy of her life, albeit one that hasn’t always been easy to harmonize.

Being from a ”third-world country” was a difficult concept for many of her American peers to grasp.

”The misconception people had of Africa in general was that it was one of those commercials of the children with the bellies and the flies,” Tesfai explained. ”Unfortunately, even in a place like L.A., where people tend to be exposed to more, they really had an offensively strong misconception of what it was like.”

Naturally, it was hard finding her place in both worlds. ”It was really hard growing up — mainly coming from Ethiopia and Eritrea back to LA. You come back here and you’re back in school, and everything kind of seems trivial and silly,” she said.

Knowing that it is a simpler life in East Africa but the people are so much happier there with less, Tesfai felt ”sort of protective over it, because I knew how beautiful it was.”

But another notion has also governed many of Tesfai’s choices throughout childhood and into the present: ”It’s not fair that where you’re born can dictate so much of your life,” she said. ”I think that shifted how my whole life went.”

It’s a truth her family knows all too well.

Tesfai’s mother was only able to come to the United States on a technicality. ”My mom came here on a nursing scholarship where four women out of 5,000 that applied were accepted, and she came in fifth. The only rule was that you could not be pregnant, and a week before they left, they found out one of the women was pregnant,” Tesfai revealed, ”so my mom got to come.”

Subsequently, Tesfai is the only member of her family ”fortunate enough” to be born in this country.

”I’ve kind of reminded myself of that and tried to make this my purpose,” said the actress. ”I was lucky enough to be born here, but I have family there. That’s how I’ve rationalized my situation to help transition.”

She also strives to use the influence afforded her by being an actress to channel help back to the people she knows are in need. Enter Fortuned Culture, the jewelry company she founded to help shed light on the dire realities often faced by people in developing countries.

Each jewelry piece symbolizes what the proceeds will help charity partners fulfill. A $30 ”Health” bracelet will feed a child in need 60 meals. A $65 ”Rebirth” necklace provides a caretaker at an orphanage five months’ salary.

”I’ve always wanted to represent a possibility,” she told us, ”and when you see something different or someone doing things differently, hopefully it inspires you that it’s more possible.”

Which is one of the many reasons Tesfai is grateful for her role on Jane the Virgin.

”I know Gina [Rodriguez, who plays Jane] talks a lot about picking roles, but it’s huge,” she said, ”and I think all of the women in our show have talked about the fact we’re very mindful of those roles that we take and the way that we portray ourselves and our cultures.”

As such, the women are fiercely proud of their workplace. ”We all want to represent our cultures in a positive way and advance the cultures and the women in a positive way, so it’s beautiful to be around a bunch of women who are very mindful of that,” said Tesfai.

”I’m inspired being able to work with these women,” she continued, ”and, hopefully, that translates to the people watching it and enjoying it, too.”

Most importantly, perhaps, Tesfai hopes the diverse cast inspires young women and gives them the courage to dare to dream.

”I want to encourage young girls to be writers or directors or follow any creative path and help them realize you can make it a career,” she said. ”They can do whatever they want. You get one life, so follow what your heart’s desire is.”