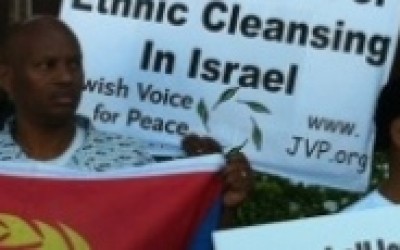 [/jqdial]Ã‚Â On Wednesday, a protest that expressed solidarity with Eritreans refugee-status seekers in Israel drew approximately 30 Jewish-Americans and Eritreans from Los Angeles and nearby. Eritrean Youth Solidarity for Change (EYSC) organized the Los Angeles protest, which took place outside the headquarters of the Consulate General of Israel in Los Angeles.

Attracting groups with disparate agendas, the event underscored the divisiveness in the Jewish community over Israel.

Ã¢â‚¬Å“This should be seen only as a human rights issue,Ã¢â‚¬Â EYSC chairman Daniel Mikael told the Journal at the end of todayÃ¢â‚¬â„¢s rally.

The gathering was one of many demonstrations of its kind that took place today as part of an international, coordinated effort.

It came on the heels of ongoing demonstrations in Israel.

At Wilshire boulevard and Barrington avenue, the site of the consulate, protestors sung out, Ã¢â‚¬Å“Asylum, yes! Detention, no! No ghettos in Israel!Ã¢â‚¬Â among other chants, a reference to the living conditions of Eritrean immigrants in Israel. The Israeli government has placed the Eritreans in detention centers.

For Mikael, the answer is clear. Thousands of Eritreans currently living in Israel fled a country that is run by a Ã¢â‚¬Å“dictatorship,Ã¢â‚¬Â he said.

In 2009, Parade magazine listed the countryÃ¢â‚¬â„¢s president, Isayas Afewerki, as the eighth worst dictator in the world.

Mikhail cited limited freedom of religion and the lack of a private press as among the country’s problems.

Eritrea is located in the horn of Africa.

They addressed a crowd of that had gathered on the sidewalk, as morning traffic crawled by.

Right Now: Advocates for African Asylum Seekers in Israel was a major participant of the gathering.

The signs held by protestors illustrated the mixed messages of the rally. Some read: Ã¢â‚¬Å“Freedom,Ã¢â‚¬Â Ã¢â‚¬Å“No Indefinite Detention Refugees in Israel” and Ã¢â‚¬Å“What Would Mandela Say?”

The co-opting of the demonstration was just one of several factors that made the event troublesome in the viewpoint of Roberta Seid. The education-research director at pro-Israel organization Stand With Us was on hand this morning, distributing handouts at the organization that labeled the demonstration Ã¢â‚¬Å“misguided,” among other words.

During an interview, Seid’s mixed feelings about the Eritrean cause were apparent.

Ã¢â‚¬Å“I think the unfortunate thing about this is it can be used to defame Israel, single Israel out, for having problems thatÃ¢â‚¬â„¢s lots of other liberal democracies have, and lots of African countries have, like South Africa, which has also been excoriated for how its treat refugees,Ã¢â‚¬Â she said.

Mikhail attempted to clarify. A native of Eritrea who has been residing in the United States for more than 20 years due to this country’s granting of refugee status to him, Mikhail said that Israel’s involvement is incidental, a consequence of the Jewish State’s geographical proximity to Eritrea and that the focus should be less about Israel’s management of the problem and more about the dire realities inside of Eritrea that has prompted so many of its inhabitants to flee.