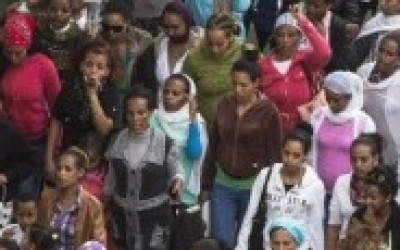 [/jqdial] African refugees who have obtained asylum in the West are to protest in front of the Israeli embassies in their respective countries in a show of solidarity with migrants seeking asylum in Israel.

The refugees will hold simultaneous protests Wednesday in Canada, Australia and various European Union countries, to raise awareness of the struggle of refugees based in Israel.

Early January saw a series of unprecedented, well-organized demonstrations by migrants in Israel, who demand that the state recognize them as refugees with the attendant international rights. Israel has so far refused to do so in all but a few cases.

An estimated 20,000 rallied in Tel Aviv, 10,000 protested outside the Knesset in Jerusalem, and 150 migrants began an open-ended hunger strike.

On Monday, the NRG website quoted one of the refugee protest leaders in Israel as saying the idea to hold demonstrations around the world came up after asylum seekers from Eritrea and Sudan living in Western countries contacted their brethren in Israel.

Ã¢â‚¬Å“They asked us what they can do, and we thought that demonstrations around the world, to raise awareness of our protest and situation, could help,Ã¢â‚¬Â the protest leader said.

Last Wednesday, representatives of the African asylum seekers participated in a meeting of the Knesset Committee on Foreign Workers. The migrants, a week earlier, were prevented by Knesset Speaker Yuli Edelstein from entering the parliament for meetings with MKs. The committeeÃ¢â‚¬â„¢s discussion centered around the Immigration and Border Authority policy toward asylum seekers and its impact on the business sector.

By: The Times of Israel