GENEVA: The UN refugee agency Friday warned that Israel could be in breach of international law due to new rules that pave the way for the potentially indefinite detention of asylum-seekers.

[/jqdial]Under legislation passed last month which has sparked mass protests by Africans in Israel, people who arrive illegally can be detained for up to a year without trial.

But Adrian Edwards, spokesman for the UN high commissioner for refugees, warned that the new rules could enable indefinite detention.

Israel has also opened a sprawling detention facility at Holot in the Negev desert to house both new entrants and immigrants already in the country deemed to have disturbed public order.

”Since Holot is housing people who cannot be returned to their countries of origin for reasons to do with non-forced returns, we’re concerned that this facility will in effect result in indefinite detention with no release grounds,” Edwards told reporters.

”Indefinite detention certainly would be at odds with human rights norms,” he added.

Israel’s right-wing government has vowed to step up the repatriation of illegal immigrants, saying they pose a threat to the state’s Jewish character, but critics counter that the country is not giving genuine asylum-seekers a fair hearing.

Israel currently hosts approximately 53,000 refugees and asylum-seekers, according to UNHCR.

Most managed to cross the desert border with Egypt, before Israel completed a high-tech barrier last year.

Some 36,000 come from Eritrea, whose regime repeatedly has been accused of widespread human rights abuses by the international community.

Another 14,000 are from conflict-torn Sudan.

”UNHCR understand the challenges faced by Israel in managing the reception of migrants and asylum-seekers,” said Edwards.

”However, it is important that the treatment of asylum-seekers be in line with international refugee and human rights law. Detaining asylum-seekers should happen only as a last resort, and in exceptional circumstances. It also should be limited to the shortest possible duration.”

”People in Holot are going to be in circumstances where their only means of being released is to volunteer to return to their country of origin. And clearly that’s of concern to us,” he added, explaining that it was tantamount to being returned under duress. 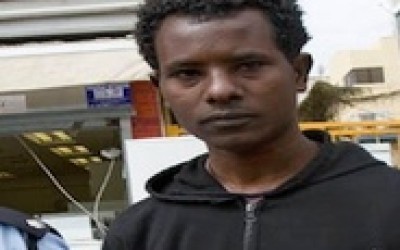 [/jqdial]Ã‚Â  This is the story of Philmon Razena, a 25-year-old Eritrean asylum seeker. Like the other tens of thousands of others, PhilmonÃ‚Â lives under constant threat of being jailed or deported by the Israeli authorities, while also being closely monitored by the Eritrean government, whichÃ‚Â terrifies Eritreans whether they are in Israel or elsewhere. Over the past month, asylum seekers from different countries take matters into their own hands, from civil disobedience to silent demonstrations on the streets of Tel Aviv, and culminating in an indefinite general strike to protest IsraelÃ¢â‚¬â„¢s asylum policies. This is their story, too.

On Saturday December 20, the Israeli media reported on a Ã¢â‚¬Å“violent altercation between EritreansÃ¢â‚¬Â in Kibbutz Kinneret, as well as claims that the Eritrean government is attempting to launder money out of Israel. These reports left many Israelis confused, so it is time to clarify things. The Eritrean Ambassador, Tesfamariam Tekeste, had arranged a conference in Israel and organized for the transportation of 600 members of the Eritrean community to Kinneret. Approximately 60 other people attended, including myself.

For us, this was to be a rare opportunity to ask the ambassador directly about the human rights situation in Eritrea and to ask about our families there. I went because my father has been in jail for several months. He was imprisoned because myÃ‚Â public opposition to the regime. I havenÃ¢â‚¬â„¢t heard from him since he was jailed.

The ambassador knew exactly who we were. The Eritrean government follows Eritrean dissidents in Israel who call for democracy. It also occasionally publishes leaflets threatening to kidnap or kill us.

When we entered the hall, the ambassador told the audience that we were working for the Ethiopian government, an enemy state of Eritrea. He ordered them to attack us and left the room. Eleven of us were injured, including one woman. When we called the police, they initially came to our defense. But the ambassador told them that we were armed criminals and we were arrested.

Why did the ambassador choose to hold a conference at Kibbutz Kinneret? Why did he not hold it in the center of the country, close to the Eritrean community? The ambassador wanted to bring people away from the watchful eye of the broader Eritrean public in Israel as well as the regimeÃ¢â‚¬â„¢s opposition leaders.

During the conference, the ambassador explained to the audience how they could get around the law which bans asylum seekers in Israel from sending money overseas. He explained a series of measures whereby they can send money to their families through the Eritrean government bank accounts in Germany. This would involve paying very high commission to the government. He promised everyone that they would be able to buy homes. These were false promises. Most of the Eritrean public does not have this kind of money. Thus, nobody can buy a home, but the government will earn commission regardless. But false promises and corruption are nothing new in the Eritrean government, nor are human trafficking, forced labor, trafficking of illegal weapons or cultivating ties with terrorists.

The government terrifies Eritreans whether they are in Israel or elsewhere. Many communities in Israel are afraid to openly oppose the Eritrean regime because they fear it would put their familiesÃ¢â‚¬â„¢ lives at risk, since they may be imprisoned like my father, or killed. Opposition to the regime comes at a very high price. I was once put in jail because I was politically active in college. So I fled Eritrea. Now my father is paying the price.

Some people are scared so they corporate with the government.There are few who believe its lies, but most do because they know that they are not protected in Israel. Every day, asylum seekers in Israel live in fear of being deported back to Eritrea because their asylum requests are not checked, nor are they recognized as refugees. There are people who believe that they might escape death or prison in Eritrea by cooperating with the government. Most of those who traveled to Kibbutz Kinneret didnÃ¢â‚¬â„¢t do so because they dreamed of buying a house; they came out of desperation and fear.

It is desperation and fear that brought 30,000 people to Tel AvivÃ¢â‚¬â„¢s Rabin SquareÃ‚Â two days ago. This is why there have been demonstrations over the last few weeks, and why we are on strike. We are striking because 54,000 asylum seekers are living in Israel without basic security, under constant threat of jail or deportation and still trapped in the vicious circle of fear that we tried to escape from in the first place.