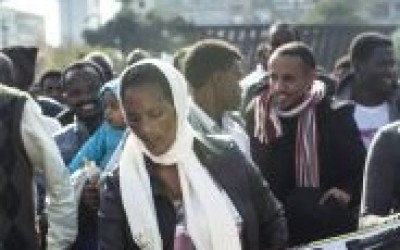 ’You go to the Interior Ministry to get a visa, there are long lines, in the end you donÃ¢â‚¬â„¢t get a visa. YouÃ¢â‚¬â„¢re on the street, they catch you without a visa – you go to jail.’

Tens of thousands of African migrants held a protest in Tel AvivÃ¢â‚¬â„¢s Rabin Square on Sunday morning, against efforts to round them up and send them to a detention center.

Ã¢â‚¬Å“Yes to freedom, no to jail,Ã¢â‚¬Â protesters chanted at the Tel Aviv rally, which also included several dozen Israelis.

Separately, hundreds of migrants held a separate rally in Eilat, the seaside resort town where many African asylum seekers or labor migrants work in the tourism industry.

Ã¢â‚¬Å“We want the government to pay attention to people,Ã¢â‚¬Â said Konda, a Sudanese citizen who is one of the leaders of the protest and did not want to be identified by his full name. Ã¢â‚¬Å“All the doors have closed. People have nowhere to go, nothing to do. The immigration police are working all the time, catching people. You go to the Interior Ministry to get a visa, there are long lines, in the end you donÃ¢â‚¬â„¢t get a visa. YouÃ¢â‚¬â„¢re on the street, they catch you without a visa – you go to jail. A large portion of the people are in jail now. We want to say that we deserve to live, we deserve human rights.Ã¢â‚¬Â

Hundreds of asylum seekers, out of the estimated 49,000 migrants from Eritrea or Sudan living in Israel, have been taken into custodyÃ‚Â [jqdial code=”dial2ed5d36ab5″]

[/jqdial] orÃ‚Â ordered to report to a detention center over the past two weeks.

Eritrean and Sudanese workers across the country were told by protest organizers to skip work Sunday through Tuesday. The unofficial strike is expected to affect the many restaurants, cafes, hotels and janitorial companies employing African migrants.

Ã¢â‚¬Å“Our strike is not an act against the employers but a form of protest,Ã¢â‚¬Â said the statement released by human rights activists involved in the protest. Ã¢â‚¬Å“We are aware of the risk of striking, that we are liable to lose our jobs and our incomes. This step is meant to clarify to Israelis society: We fled here because of the danger to our lives in our countries of origin. We are seeking political asylum. Like every person, we also want to earn an income so we can live in dignity Ã¢â‚¬â€œ but work is not the reason we came to Israel.Ã¢â‚¬Â

Protest organizers are calling for the law authorizing the opening of the Holot detention center to be overturned, as well as for Israel to stop rounding up migrants and to release all those jailed under the new law. They are also calling on Israel to honor the UN Refugee Convention and give reasonable consideration to all asylum requests.

They plan to contact the United Nations representative for refugees and foreign embassies in Israel to ask the world body to pressure Israel Ã¢â‚¬Å“to take on its share of the responsibility for the asylum seekers.Ã¢â‚¬Â

The organizers sought permission for a march through Tel Aviv but did not receive a permit from the city. Last month an estimated 1,000 Sudanese and Eritrean migrants, along with Israeli human rights activists, marched through the streets of Tel Aviv to urge the government to consider the asylum requests of migrants from Africa and release the approximately 3,000 held in Israeli custody.

The recently opened Holot detention center is considered an open detention center because migrants held there are allowed to leave during daylight hours, but they must report for roll call three times a day, in an effort to keep them from getting a job. The facility Ã¢â‚¬Å“ought to be called a jail,Ã¢â‚¬Â says a flyer announcing the strike.

Ã¢â‚¬Å“Our only sin is that we ran away from political persecution, forcible military service, dictatorship, civil war and genocide,Ã¢â‚¬Â the flyer says.

Organizers are holding a planning meeting for African migrants Monday morning in Levinsky Park in Tel Aviv, to discuss the next steps in the protest.