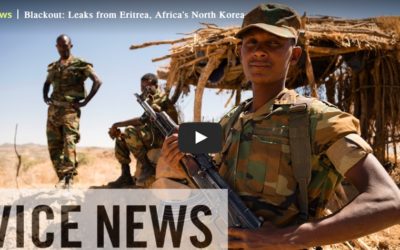 Inside Eritrea: The World’s Most Censored Country

Once you learn about the human rights violations and absolute censorship in Eritrea, it’s astounding that not more attention has been brought to this issue.

With only one government-controlled television channel and one newspaper for a nation of six million people, Eritrea has been deemed the world’s most censored country. Eritreans have little to no opportunity to speak freely, to criticize the government regime, and to earn an education and work as they please. Everyone is forced into lifelong military service, akin to slavery. (For those who are college educated, their degrees go to waste.) Refugees have called Eritrea a country of ”no opportunity.”

Eritrea first earned its independence from Ethiopia 25 years ago, but since then, its citizens have been deprived any personal independence whatsoever. With no free media in the country, the abuses taking place within its borders have been underreported. Word gets out often via refugees who flee to Europe, Ethiopia, or Israel seeking better lives and opportunity.

I learned about the government abuses in Eritrea from Tekle, an Eritrean refugee I tutored in English in south Tel Aviv where he and I both lived a couple years ago. The 5,000 refugees who risk their lives leaving Eritrea each month—often to be caught, tortured, and returned home, until they try again, Tekle described—work tirelessly to educate themselves and communicate whatever information they can back to family at home. It’s a difficult task, however, when only one percent of the Eritrean population has access to the internet, and only six percent have cell phones.

Underground activists, inside and outside the country, have figured out a few creative ways, however, to spread the message of freedom and organize those left home in Eritrea: internet opposition, Facebook posting, satellite pirate radio, cold calling Eritreans at home, writing messages on banknotes, and putting up posters in the middle of the night.