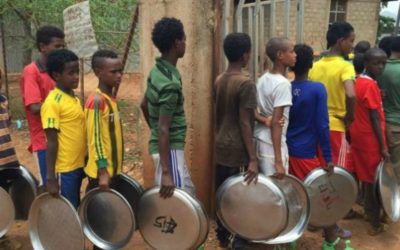 Remittances to Eritrea, once estimated to account for about a third of the country’s gross domestic product, are shrinking with Eritreans in the diaspora now spending the money on helping people leave Eritrea instead of supporting relatives at home, an official told BBC.

Five thousand Eritreans leave the country each month, making it one of the world’s top producers of refugees, according to a U.N. commission report.

The scale of the migration has drawn Western interest and attention to conditions inside what is one of the world’s most closed countries. With a population of 3.5 million to 6 million, it’s one of Africa’s poorest countries. Eritrea is a one-party state with no functioning constitution and no independent media, BBC reported.

Youth who have risked their lives to flee Eritrea describe a long-standing system of forced labor, among other human rights violations. A U.N. commission said these may constitute crimes against humanity, according to the Council On Foreign Relations, a U.S. foreign policy think tank.

In the past, Eritrean authorities were happy for disaffected youth to leave the country, a diplomat told BBC. They were a potential threat to stability and once working abroad, were likely to end up sending remittances home if they made it safely to their destinations.

But Eritrea now faces a shortage of workers and is doing more to encourage youth to stay, including paying more. The Eritrean national service is increasing its pay from about $50 to $130-to, said Hagos Ghebrehiwet, economic adviser to the president, BBC reported.

The cost of living has shot up in Eritrea, and there are electricity and water shortages.
Families receive food subsidies for cereal, oil and sugar but other items are expensive. A liter of milk costs more than $2.

Taxi drivers, shopkeepers and hoteliers say their incomes have been cut in half since a new form of currency was introduced at the end of 2015 — part of a government effort to control smuggling and human trafficking. They say restrictions on imports and limits on the amount of money they can withdraw from banks are hurting business, BBC reported.

Conscription in the national service program is the factor most commonly cited by asylum seekers who have fled the country, according to the Council On Foreign Relations. The Eritrean government justifies the program as one that will develop the country and foster a common sense of national identity. A statutory requirement of 18 months of military or civilian service was extended in 2002, following the war with Ethiopia. In practice, many adults report serving into their 50s, often earning less than subsistence wages.
For many, desertion and immigration are the only way to leave the Eritrean national service, according to the U.N. Commission.

The Eritrean foreign ministry refutes the U.N. Commission report, saying it is part of a “politically motivated campaign to undermine the political, economic, and social progress the country is making.”

The Eritrean government is ambivalent about people leaving because it benefits from the large diaspora, the International Crisis Group reported. The government collects a 2 percent income tax from many immigrants through consulates or party affiliates overseas. In 2011 the U.N. Security Council called on Eritrea to “cease using extortion, threats of violence, fraud, and other illicit means” to collect this tax, which yielded $73 million for the country from 2010 to 2013, the U.N. monitoring group found in 2014.

According to the International Crisis Group:

After initial, sometimes brutal attempts to obstruct emigration, a symbiotic system has emerged that benefits a range of actors, including the state. The government ostensibly accepts that educated, urbanised youths resistant to the individual sacrifices the state demands are less troublesome and more useful outside the country – particularly when they can continue to be taxed and provide a crucial social safety net for family members who stay home. Meanwhile, those who remain tend to be the more pliant rural peasant and pastoralist population. Yet, the exodus is not limited to urbanised and educated youth; migrants, including an increasing number of minors, now come from a wider cross-section of society.

Eritreans in the diaspora contribute to Eritrea’s economic survival by sending their families remittances, which provide the country with foreign reserves and help families survive.

Where do Eritrean immigrants go?

About 250,000 Eritreans live in refugee camps and cities in neighboring Ethiopia and Sudan, according to the Council on Foreign Relations. In the first eight months of 2015, the top three recipients of asylum applications from Eritreans were Switzerland (7,475), Germany (5,500), and Sweden (4,645). The U.K. and U.S. have well-established diaspora communities.

Another well-traveled route for Eritrean immigrants goes through Egypt to Israel. In the Sinai Peninsula, Eritreans face torture, extortion, and rape at the hands of traffickers—at times with police and military cooperation, Human Rights Watch reported. From Sinai, they cross into Israel, where 33,000 Eritreans live, the country’s interior ministry said in August 2015.

After Syrians and Afghans, Eritreans are the third largest nationality to cross the Mediterranean Sea, Al Jazeera reported.