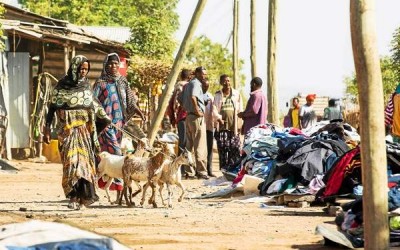 It started because Chris Cotter knew he had to be more than a traveler.

Growing up comfortably in Avondale, Cotter’s family owned a food distribution company, and the busy work life meant no vacations. So after graduation from Avon Grove High School, Cotter, who now lives in West Chester, was itching to see the world. “I’m sure it contributed to wanting to travel,” he said of his childhood.

Cotter’s explored at every opportunity: Asia, Europe, Central America, South America and the United States. He’s even climbed the 19,000-foot Mount Kilimanjaro in Tanzania, about which he said with a laugh, “People aren’t meant to be that high.” When not on a world trek, Cotter owns and operates Tailor Made Media and TribeSound Records in West Chester, where he is a video and music producer.
But it was during his many travels that it became starkly clear to Cotter the disadvantages of others and that as a “First World” resident, “(I’m) super lucky to be born in this body.” And it was with this realization and humility that he began forming the idea of using his professional skills to make a documentary film, shining some light onto an untenable situation somewhere else in the world.

At first Cotter started doing research about human trafficking in Cambodia and Vietnam, but he was running into roadblocks. It was then a friend’s father – Mark Bowden, former journalist and author of books including “Black Hawk Down: A Story of Modern War” – suggested Cotter look into the plight of Eritrean refugees.

The State of Eritrea is a small country in the Horn of Africa that shares its border with Ethiopia in the south. Thousands of Eritreans have left their country and ended up in refugee camps in Ethiopia, on their way to hopefully receive asylum in Israel.

Cotter knew theirs was a story he wanted to tell. The refugees report overwhelming oppression committed in their country under the government of President Isaias Afwerki, Cotter said, with disappearances, torture and inhumane imprisonment not uncommon. Even if they do make it to Israel, they aren’t necessarily welcomed. Cotter wanted to follow the typical path from start to finish.

He also wanted very much to tell their story because he believed the story of their plight was underreported.

“It’s hard to find anyone who’s even heard of the country,” Cotter said, let alone the problems for the refugees.

“You find very little when you search for (information about the refugee camps),” said Joe Acchione, a director/producer at Tailor Made Media who worked on the film. Even Reporters Without Borders, the international nonprofit that champions freedoms of information and the press, didn’t have much posted on its website about the refugees, he said.

Cotter was especially interested in talking to those living in camps in the Afar region of northwest Ethiopia, which is among the hottest places on Earth.

“It was a pretty clear mission,” the filmmaker said.

So Cotter, cameraman Scott Miller and a lot of camera equipment, flew to Ethiopia. There they retained a guide, translator and driver. They had to be careful, because “If people are found talking to a journalist, they could be imprisoned or fined.”

In a film trailer, Cotter shows the audience people living in shacks in a hot, barren, dusty landscape, many of them children. In an interview clip from the film, U.S. Assistant Secretary of State Anne C. Richard says Eritrea had “one of the most repressive governments on Earth.”

Richard says she had experience visiting many kinds of refugee camps all over the world, but she was “shocked at how many children there were and at about how bad the ratio was of adult supervision to children.”

In the same clip, a young boy tells Cotter, “There are so many children with so many problems. We need somebody to look after us.”

Cotter said, “We interviewed a kid 15, maybe 16, who had been in the refugee camp for three years. He walked there. His mom was disabled; his dad in the military … his brother was conscripted into the army. There just wasn’t enough money to go around.”

Another film clip has Cotter reporting that “children as young as 8” take deadly risks by making the trek, including being shot, tortured or “even having their organs harvested.”

They report on a man who hadn’t seen the sun for 2½ years, after being imprisoned underground.

During the course of the film, Cotter and his company have had critics, stating that the filmmakers are racist and the film is a Western campaign against the country. They have received emails, said Acchione, to which they have responded in thanks and invited the writer to respond. The filmmakers had heard nothing back at the time of the interview.

Editing 50 hours of film down to an hour has been difficult, but the biggest obstacle Cotter said he has faced is having enough money to complete the film. After using their own funds, and getting some help from family and friends,“it’s 80 percent done,” Cotter said. The filmmakers have turned to Kickstarter, an online donation site, which had allowed thousands to contribute toward its completion.

In the future, Cotter hopes to make more documentaries. “But the next time,” he said, smiling, “I’ll do one where they speak English.”