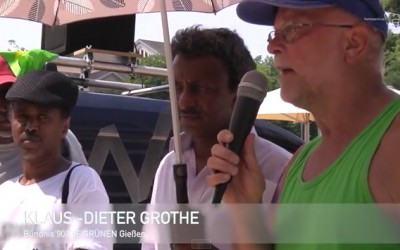 We do not want ”FESTIVAL OF FEAR” – Klaus-Dieter Grothe

Ironically, in Giessen, where every year thousands of people seek shelter and safety from the inhuman dictatorship in Eritrea, organized this regime a festival on July 4th and 5th. The government thus overrides the decision of the City Council, which has called this festival ”not desirable in casting” as. The many refugees will be shown on the part of the regime that they are also in Germany under surveillance, they should continue to be afraid. 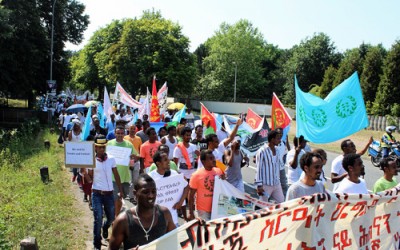 Around »Eritrea Festival in Giessen” this time no violence

”Down with the dictator,” demonstrators shouted. Such a festival just in Giessen, where hundreds of refugees and asylum seek refuge in front of the Eritrean regime, they condemned as a ”provocation”. The festival spread fear among the refugees. In recent years, there had been several times to violent clashes between visitors of the festival and Eritrean opposition. This weekend, a confrontation did not happen.

”Giessen is a place of freedom”, held the parliamentary leader of the Greens in the city council, Klaus-Dieter Grothe, fixed in a rally in front of the town hall. Therefore, there is no place for a ”Festival of Fear”. Grothe was next to representatives of three organizations for a democratic and free Eritrea notifying the demonstration. The Green Party cited a report published in June a commission of inquiry by the UN Human Rights Council on the current situation in Eritrea in his speech. The document accuses the East African regime systematic torture, forced labor and arbitrary executions that meet the ”offense of crimes against humanity” could. ”The regime murdered and raped,” Grothe is summoned to the UN report. A ”Eritrea Festival” must be located in Giessen therefore ’not put up with ”.

Also the Giessen SPD chairman and Member of Parliament Gerhard Merz, who recalled the appeal made by the city council three years ago to prevent events such as the ”Eritrea Festival” in the future Hessenhallen participated in the rally in front of City Hall. ”Propagandists of the regime are not welcome here,” said Merz. Mayor Gerda Weigel Greilich addressed in a speech, meanwhile, to the Eritrean refugees, which the city ”wants to offer a good stay” as well as language courses and training opportunities. The aim was that the refugees return in the future to their homes ”and there can build a democracy with. For that we want to create the conditions with here, ”In another speech of living in the US exile Eritreans called Dr. Russom Mesfun: task must be to the Eritrean regime». To eliminate by peaceful means ”.

The 150 demonstrators moved from the Town Hall over the road to the Hessian Rödgener initial reception. On banners, they demanded freedom for political prisoners, complained persecution and torture and called to commemorate the victims of the Eritrean Government. In addition, a symbolic action, they gathered at the suggestion Grothe waste a – ”as a thank you to the city,” and the decision of the city council against the ”Eritrea Festival”.

Before the Hessenhallen held on Saturday afternoon 30 oppositionists a vigil. That it came to no aggressive confrontations like in the past, evaluate the demonstrators as a success of their ”peaceful protests”.

Inside, the guests danced to songs meanwhile known Eritrean musicians like Melekin Atombes, Henok Teklay and Isaias Debesay. Among the guests was also Osman Saleh Mohammed, the Eritrean Government has been committed since gaining independence in 1993 – first as a minister of education, since 2007 as foreign minister. Eritrea is a free country, he said in brief conversation with the Allgemeine Zeitung. Who say the opposite, pursuing propaganda or have never visited the country.