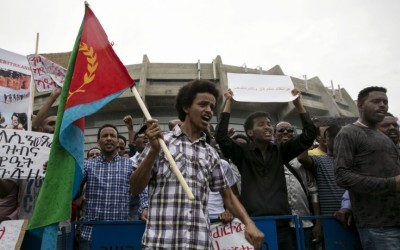 The United Nations Human Rights Council (UNHRC) has admitted making a error by publishing a letter on its official website from the Eritrean government containing two paragraphs copied from an earlier North Korean statement.

The letter was in response to a 484-page report of the council about Eritrea’s ”systematic and gross” human rights violations, which may amount to crimes against humanity.

The Eritrean mission called the report ”totally unfounded and devoid of all merit” and dismissed the accusations of human rights violations as ”a continuation and escalation of politically motivated campaign to undermine the political, economic and social progress the country is making”.

After accusing the US of setting up a ”human rights racket”, the letter included a statement with reference to the Democratic People’s Republic of Korea:

”The moves of the hostile forces to dare provoke the socialist system of the DPRK which was chosen and has been consolidated by the Korean people will not be able to escape disgraceful doom.”

The human rights council spokesman Rolando Gomez told IBTimes UK that the reference to the North Korean dictatorship ”was indeed an error committed by the UN Secretariat in processing this Human Rights Council document”.

He added: ”The corrected version will be on-line soon.”

A quick search showed that the original statement was published in February by the DPRK spokesman for the foreign ministry in reference to a conference held in Washington about human rights violations in North Korea.

Eritrea and North Korea are the first and second most-censored countries according to a list compiled by the Committee to Protect Journalists.