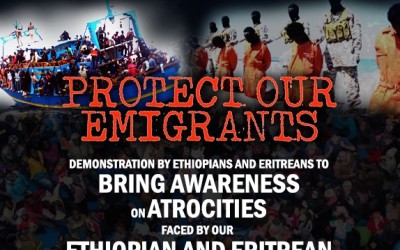 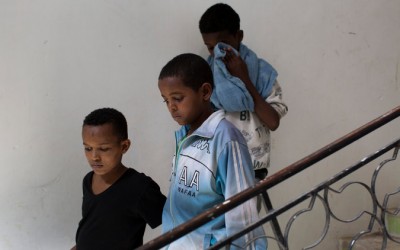 ZAWIYAH, Libya — The no-money-down offer was too tempting for the children to resist.

Smugglers had offered the boys and girls transportation out of the refugee camps along the Eritrean border, across the African deserts and the Mediterranean Sea, to a new life in Europe. There, they could quickly win asylum and bring along their parents, the smugglers assured them. Payment could come later.

By the time the smugglers had conveyed the boys and girls to Libya, however, the offer had become an ultimatum. The children, some as young as 8, called their parents to relay a demand from the smugglers for more than $3,200. For parents, failure to send the money meant abandoning their sons and daughters to the chaos of Libya.

Zackarias Hilo, 19, the oldest of about 40 Eritrean boys held by the authorities here at the time of a recent visit, said his father had initially exclaimed that he was too poor to pay. “Then I am dead!” Zackarias replied.

So to come up with the payment, “my father went to the old city to sell all his goats,” Zackarias said.

“It was the same for all of us,” he said, surveying the younger boys. Adult refugees who traveled with them confirmed their accounts, which aid workers said were common. In the case of one 8-year-old, a father in Eritrea and a sister in Norway provided corroboration as well.

There are about 80 Eritrean boys and girls now imprisoned in two detention centers here. Ill prepared to evaluate the smugglers’ offers, such children are among the most innocent victims of the human smuggling machine that is now sucking so many African migrants into the Libyan maelstrom and out onto the Mediterranean waters.

Out of roughly 170,000 migrants arriving in Italy by sea from Libya last year, more than 13,000 were children traveling alone, and 3,394 of those were Eritrean, according to the International Organization for Migration, an intergovernmental agency based in Geneva. In just the first few weeks of this year’s peak sailing season, about 30,000 have crossed, including more than 5,000 so far this month and a total of more than 1,680 unaccompanied minors.

More than 50 children, including some traveling with their parents, are believed to have drowned along with 700 others when their overloaded boat capsized in April. On Tuesday, aid groups said that as many as 40 other migrants had drowned as well, and last year, hundreds of children died the same way.

The families being extorted by the smugglers are invariably already impoverished. In Eritrea, the average per capita income is about $550 a year, according to the most recent World Bank figures, so meeting the smugglers’ ransom can consume the savings of a whole village or more.

“The smugglers are very creative,” said Meron Estefanos, an Eritrean rights activist in Stockholm who works with migrants. “Once the smuggler gets the children to Libya, the parents have no option but to send money, because there is no return.”

If the children reach Europe, she said, “the first thing they ask me is always, ‘Can I bring my parents?’ ”

The unaccompanied children come from many countries, including 1,481 from Somalia, 1,208 from Gambia and 945 from Syria last year, according to the International Organization for Migration. In some cases, parents may consciously send children in the hope that they will be more likely to win asylum.

But the largest number of unaccompanied children come from Eritrea, a dictatorship so severe it is sometimes likened to North Korea. Western countries grant asylum to almost every arriving Eritrean. And the Eritrean children, aid workers say, often slip away without the knowledge of their parents.

Eritrea drafts every man and woman as young as 18 into a brutal system of military service that frequently lasts many years and can amount to slave labor at state-run industrial projects. To escape, hundreds of thousands of adults have fled, often to refugee camps across the hilly border with Ethiopia. Each year, hundreds of unaccompanied children following the same footsteps walk into Ethiopia. The camps currently house more than 1,500 without their parents, aid workers say.

“They are referred to as ‘orphans’ inside the camps,” said John Stauffer, founder of the America Team for Displaced Eritreans, a nonprofit group.

Efrem Fitwi and Hermon Angosom, 8-year-olds at the detention center here, appeared in an earlier New York Times article about migrants in Libya. “I saw what happened to my brothers; I saw my future,” Efrem said when asked at more length about his journey.

“We don’t have any education,” he said, squatting on the dirt courtyard of the detention center and speaking Tigrinya, a language native to Eritrea and Ethiopia, while Zackarias translated. “My brothers and sisters don’t have any school. So we want to go to Ethiopia.”

Most children who make the trek without telling their parents regret it as soon as they arrive, aid workers say. But Eritrea considers them defectors and criminals, barring any return. “They get stuck there in the camps,” Ms. Estefanos said. “It is very common.”

The camps are also where the smugglers trawl for passengers. Efrem and other Eritrean boys in the Libyan detention center said their smuggler was Ermias Ghermay, an Ethiopian who is wanted by the Italian police for the drowning of 366 migrants off the coast of Lampedusa in 2013.

His name resurfaced recently in Italian news reports about a police recording of a telephone call in which smugglers discussed where to invest their millions in profits.

“They say I let too many people board the boats,” Mered Medhanie, a 34-year-old Eritrean smuggler nicknamed The General, reportedly said. “But they’re the ones who want to leave right away.”

From the refugee camps in Ethiopia near the Eritrean border, Mr. Ghermay’s crew packed the children in the back of a truck with a dozen other migrants to drive west to Sudan and then north to Libya, children and adult passengers said. Hermon and several other boys and girls said it was in Sudan that they first called their families.

Hermon called his older sister, Haben, 22. She had recently traveled a similar route across the Mediterranean and had finally reached Norway, where she applied for asylum, she said in a telephone interview.

Having experienced the journey’s perils, she pleaded with Hermon to turn back or stay in Sudan — anything but continue to Libya — and she initially persuaded him, both said.

But after they hung up, Hermon felt afraid to stay alone in Sudan and unsure how to go back, he said in an interview in the detention center.

“We don’t have friends in Sudan, we don’t have family there, and I am small and I am scared,” Hermon said. “I missed my mother and my father, so I wanted to get to the outside.” He allowed the smugglers to carry him on despite his sister’s warnings.

The smugglers held Hermon captive in a squalid “collection house” somewhere in western Libya — neither the boys nor the adults who traveled with them knew where — until his sister in Norway could send enough money, about $1,600 for the ride to Libya and another $1,600 or $1,800 for the boat ride into the Mediterranean. He waited four weeks while she begged for money from family and friends.

Finally, in the dark of night, the smugglers put Hermon and Efrem in an inflatable dinghy to carry them out to a fishing boat packed with more than 200 others. The engine failed almost immediately, so they were pulled back to shore and arrested.

Now, at the Libyan detention centers, the boys and girls spend most of their time caged in concrete bunkers — the boys on thin pads on the floor, the girls on rows of beds that fill the floor space. The food is little more than rice and macaroni.

There are few opportunities for recreation and no chance of education. The United Nations refugee agency has largely withdrawn from Libya because of the escalating violence. So have most other international aid groups.

Each of the centers held more than 400 adults as well as about 40 children, many apparently younger than puberty.

None of the boys and girls knew where they were or how they might get out. Many of the children speak only limited Arabic in an Eritrean dialect, and none of the guards speak Tigrinya.

Hermon was stoic at first. Then a visiting journalist said he had reached Hermon’s father in Eritrea, who was glad to hear news of his son. At that, Hermon hid his face to weep, uncontrollably.

Later, Hermon was given a phone by a visiting journalist and allowed to call his mother. But his guards insisted they stay in the room, and then mocked him for crying.

“There he goes, crying and fussing to his mama, but his parents are the ones who sent him,” a jailer said, accusing him of fabricating stories of mistreatment.

Another boy of about 8, Filimon Burust, was allowed to speak by phone to Ms. Estefanos, the rights activist. He alternated between childlike terror and adult suspicion, she said.

“I am not going to tell you where my father is,” he told Ms. Estefanos, warily. “Just tell my mother to tell my father where I am — she knows where he is.”

Hermon’s sister, Haben, had lied to her parents, assuring them that Hermon was safely on his way, but her lie was exposed when Ms. Estefanos reached his father.

In reality, Haben said she had previously spoken only with the smuggler, Mr. Ghermay. He demanded another $600 for a bribe to secure Hermon’s release from detention, then put him back on another dangerous boat.

Is my sister doing anything to help me, Hermon asked in a phone call with Ms. Estefanos. Was the price of his release in American dollars or Libyan dinars?

“You just concentrate on taking care of yourself,” Ms. Estefanos said she told him.