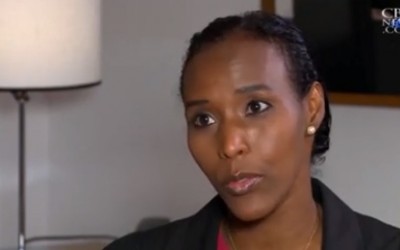 Ex-Muslim: Koran Revealed a Religion I Did Not Like

Walter came to Sweden from Somalia as a war refugee when she was 19. She says she was excited about joining a modern European nation with equal rights for women. But as a young Muslim woman, that was not the Sweden she encountered.

A Real Introduction to Islam

It was in Sweden that she first experienced radical Islam on a daily basis.

”I discovered Islam first in Sweden. In Somalia, you’re just a Muslim, without knowing the Koran. But then you come to Sweden and you go to mosque and there is the Koran, so you have to cover yourself and you have to be a good Muslim.”

Walter says she grew up in Somalia never having read the Koran.

And it was in Sweden that Walters says she discovered Allah is a god who hates, and that Islam is not a religion of peace.

”It’s about hating and killing those who disagree with Islam. It’s about conquering. Mohammed, he was immoral. He was a bloodthirsty man. He was terrible man, and Muslims can read that in his biography — what he did to Jews, how he raped women, how he killed people. I mean, he killed everyone who didn’t agree with him,” she explained.

Discouraged, Walter left Islam and became an atheist, until one day a family member encouraged her to read the Bible. She still remembers the first time she read Matthew 5:44, where Jesus said to ”love your enemies and pray for those who persecute you.”

”It was very strange for me to ’love your enemy,’ because in Islam it is ’kill your enemy.’ ’Kill your enemy and anyone who refuses Islam.’ But Jesus Christ was all about love and peace and forgiveness and tolerance, and for some reason, I needed that,” she said.

She went to see Pastor Fouad Rasho of Angered Alliance Church, a Syrian immigrant who ministers to former Muslims in Sweden.

”She started to believe and she came to me. And that was the beginning of her trusting,” he said.

When she accepted Christ, Walter said she felt ”so happy” and ”filled with joy.”

Walter says the Lord gave her a burden for Muslims who still do not know the truth about Islam.  And she began to study the Koran, and began copying verses from the Koran and handing them out on the street to Muslim women.

”Sometimes they listen and sometimes they become very upset, and I tell them, ’You know your husband has a right to beat you if you don’t obey him?’ And they say ’No, It does not say that.’ ’Yes, it does say that.’  I thought if I tell them about Muhammed and about the Koran and about this god of Islam who hates, who kills, who discriminates against women, maybe they will have a choice and leave,” she explained.

But in politically correct Sweden, Walter has come under attack for simply repeating what is in the Koran.

”I’ve been called an ’Islamophobe,’ and yeah [they tell me], ’You’ve been bought,’ ’You’re a house nigger,’ and stuff like that, terrible things, ” she said.

She has also been called a racist. Walter warns that Islamic radicalism is a serious threat in Sweden, and says Swedish society should care more about women trapped in Islam.

Walter lives under death threats and sometimes travels with police protection.  She wanted to show us Muslim areas around Gothenburg, but had to first dress as a Muslim. She believes if she were to show her face, she would be attacked.

”I can never go to those areas just being me, flesh and blood Mona. I would never get out of there alive,” she said.

”I mean, Muslims are normally good people like everyone else,” she continued. ”But then when they read the Koran, then they become a killing machine.”

”This so-called ISIS or el Shabab or Boko Haram, they’re not like extremists. They’re not fanatical. They’re just good Muslims, good Muslims who follow the teachings of Islam. The prophet Mohammed, he did that. They’re doing what he did,” she explained.

Walter now uses videos and speaking appearances to spread her message. And she says she won’t stop, even though her life is in danger. 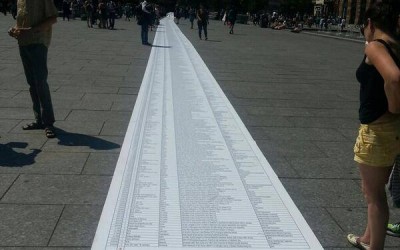 The List of 17306 documented refugee deaths through Fortress Europe,

The list is not complete, but documentation on 01-11-2012 by UNITED.  Only recently lots of people died in the Mediterranean Sea, and people will continue to die as long af Frontex and Eurosur have not been burned down to the ground.