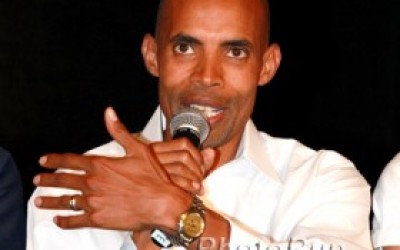 Meb Keflezighi To Speak At ATC

The Olympic silver medalist is the guest of honor at their annual social.

What follows is a report posted on the Running USA Web site:

TLANTAÃ‚Â  Ã¢â‚¬â€œÃ‚Â Olympic Silver Medalist and New York City Marathon WinnerÃ‚Â Meb KeflezighiÃ‚Â has been announced as the guest speaker atÃ‚Â Atlanta Track ClubÃ¢â‚¬â„¢s 2014 Annual Social. The event will be held on Thursday, January 9 at 6:30 p.m. at The Foundry at Puritan Mill in Atlanta.

Keflezighi has participated in three Olympic Games for Team USA, winning a silver medal in the 2004 Olympic Games Marathon. He also placed first in the 2009 ING New York City Marathon, making him the first American to win the worldÃ¢â‚¬â„¢s largest marathon since 1982. Keflezighi was born in Eritrea, but fled the war-torn country with his family and later became a U.S. citizen in 1998. He now lives in San Diego.

Ã¢â‚¬Å“We are delighted to have Meb as our guest speaker for Atlanta Track ClubÃ¢â‚¬â„¢s 2014 Annual Social,Ã¢â‚¬Â saidÃ‚Â Sue Payne, Atlanta Track ClubÃ¢â‚¬â„¢s interim executive director. Ã¢â‚¬Å“Meb had to work hard to achieve his success, as well as overcome incredible obstacles. We believe his story will be an inspiration to our members and other runners and walkers as they begin to work towards their health and fitness goals for the new year.Ã¢â‚¬Â