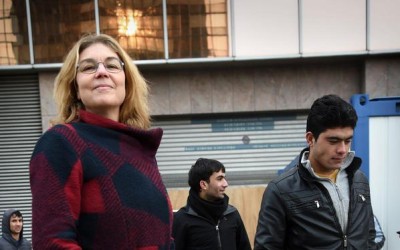 Eritrea expert not guilty of defamation

Professor Mirjam van Reisen has not acted unlawfully by the former chairman of the Eritrean movement YPFDJ to characterize in an interview as ”central intelligence Eritrea whose center is in the Netherlands. This particular the Amsterdam District Court Wednesday.

Van Reisen was sued by the Dutch-Eritrean Meseret Bahlbi for libel and slander. Bahlbi recognized himself in the decision of the Eritrea-expert and professor at the University of Tilburg, although they did not mention his name. He speaks of a ”criminalization accusation ’that has not been substantiated in fact. Since the verdict would have damaged his reputation, Bahlbi demanded in a lawsuit rectification and compensation of 25 thousand euros.

That requirement Wednesday showed off the court. The professor has claimed the court did not have information on specific actions or actions of Bahlbi for the intelligence of Eritrea. But she has adequately demonstrated that the YPFDJ Bahlbi which is an active member, can be regarded as the ”long arm” of the regime in Eritrea and ’to be provided to the regime the information from that organization. ”

The judge concluded that the YPFDJ ’support for the regime of dictator Afewerki’ aims and that members’ work as informants ”for the regime. It is clear to her that Bahlbi as (former) president of the Dutch branch of the YPFDJ, visitor sessions of this party and participant training in Eritrea, ”is linked to the regime in Eritrea and the ideas of this regime actively supports.

The professor made the statement last May in an interview for BNR. The program asked her reaction to an article in the magazine about OneWorld Eritrean supporters of the regime that would work as an interpreter for the IND. Two of those interpreters, according to OneWorld’s brother and sister of the (then) president of the YPFDJ in the Netherlands. This youth movement is linked to the only authorized party in Eritrea dictator Afewerki.

In the interview, Van Reisen says there is strong evidence that such an interpretation information by playing on asylum-seekers to the regime in Eritrea. ”The brother of the two in question is the hub of the intelligence service of Eritrea whose center is in the Netherlands and that’s a fact.”

No proof
That statement is in accordance with the court under the right to freedom of expression enshrined in the Constitution. The professor must publicly critical, informed, opinionated and able to express warning about abuses affecting society, according to the verdict.

Lawyer Q. Meijnen of Meseret be Bahlbi says ”very pleased” that the court states that there is no concrete evidence that Bahlbi in the Netherlands spying or intelligence is passed on to the Eritrean regime.

Counsel for Mirjam van Reisen, Ph van den Biesen, states that the professor in the interview was not to do Meseret Bahlbi. She called his name. ”It was her for the abuse that in Eritrean refugee matters is interpreted by interpreters who are linked directly or indirectly to the dictatorship in Eritrea.”