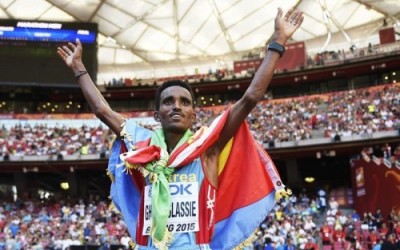 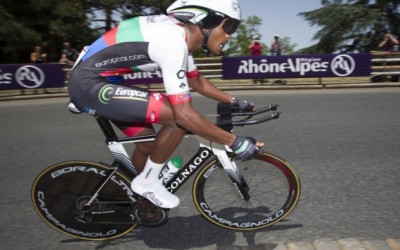 THE first African team to ride at the Tour de France has accepted an apology and a charitable donation after one of their riders was racially abused.

MTN-Qhubeka – which is led by Scots general manager Brian Smith – complained after Eritrean Natnael Berhane was allegedly abused by Belarusian rider Branislau Samoilau at a race in Austria.

Berhane is alleged to have been subjected to racist abuse by Samoilau, during the Tour of Austria on Wednesday and the squad took his complaint to the sport’s world governing body, the UCI.

Samoilau rides for CCC Sprandi Polkowice and a statement from the Polish team said: “The rider will suffer consequences.”

The incident at the Austrian race took the shine off what should have been a historic day for the team as rider Daniel Teklehaimanot became the first black African to wear the polka dot king of the mountains jersey in the Tour de France, being held at the same time.

Qhubeka is a charity – World Bicycle Relief’s programme in South Africa – and means “To move forward”.

It is understood Samoilau will donate a month’s salary to the organisation.

Smith, from Paisley, raced as a professional in the 1990s and his career included British titles and a one-year stint with a young Lance Armstrong at the Motorola team.

Last year Smith was asked by MTN-Qhubeka, Africa’s leading team, to recruit a squad and manage it for the Tour de France.

Speaking from the team car on day seven of the famed race, he said: “It goes without saying that in this day and age, racism has no place in any sport.

“I both hope and believe it will be a one-off case.

“As far as we are concerned the situation has been dealt with, the team and rider has apologised and so the matter is settled.”

MTN-Qhubeka team principal Douglas Ryder had called the incident “outrageous”, while Sprandi Polkowice said that the rider’s actions were “unacceptable”.

A statement from Sprandi Polkowice read: “In the heat of the battle some words have been said by our rider, which were very unfortunate and unacceptable.

“We, as a team, do not tolerate that kind of behaviour and the rider will suffer the consequences.

“Before the next stage, the situation has been clarified between the two teams and the riders, but we don’t want to get into details.”

The majority of the professional peloton is supportive of MTN-Qhubeka’s efforts, but there have been unfortunate incidents, with team members Edvald Boasson Hagen, from Norway, and Tyler Farrar, of theUnited States, sometimes having to intervene.

“Some of the riders are struggling to grasp what we are doing here. They are in the minority I’m glad to say,” Ryder added.

“One of the biggest teams in the world last year in the Tour of Spain, when we were trying to bring one of our riders to the front going into the mountains, said, ‘You guys don’t belong here’.”

He revealed, though, that the team has “had massive support from the major team owners and bosses”. 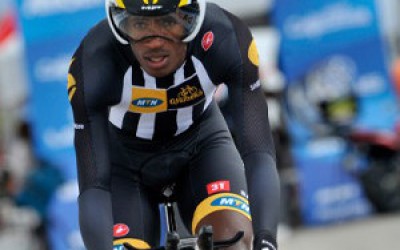 Natnael Berhane made it an even better day for MTN-Qhubeka by finishing in third place.

It would be an extremely long day of competition at the Eritrean national time trial champs on Friday as the first rider would start as early as 6am.

A total of 108 riders would set off in the race against the clock and after a few delays during the course of the day, the last eight riders finally got under way around 5pm.

Merhawi Kudus was one of the first starters and his early benchmark would stand the test of time right up until the last wave of eight riders set off. Teshome would better the time set by Kudus by just 33 seconds to briefly go into the lead. Teklehaimanot soon followed the MTN-Qhubeka Feeder Team rider home and would post a new best time by four seconds.

Defending champion Berhane was the last rider to finish and he would split Teshome and Kudus to claim third place.

Overall it was a great day of racing for MTN-Qhubeka with the three riders in the top four and the other rider coming from the MTN-Qhubeka Feeder Team.

Teklehaimanot’s victory also means that the national time trial jersey of Eritrea will debut at the Tour de France when stage 1 gets under way on the 4th of July.

”I am very happy to take this victory. It was a long day but to finally end with a win is a great feeling. To wear the flag of Eritrea at the Tour de France will be very special and I will try to do everyone proud. Thank you to everyone for all the support,” Teklehaimanot said. 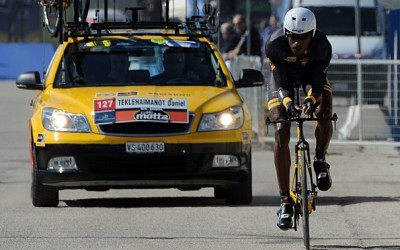 Two Eritrean cyclists will be the first from their country to compete in the Tour de France after being picked by the MTN-Qhubeka team.

The South Africa-based team, the first from Africa to gain a Tour place, selected the 21-year-old climbers Merhawi Kudus and Daniel Teklehaimanot in their final nine-man group on Tuesday.

MTN-Qhubeka was given a wild-card entry for the Tour.

Of the Eritrean refugees in Europe, 30-year-old Yohannes Hadgu Girmay is a step ahead. He can run 10 km in 29.03 minutes. He was born to run but was forced by his country into the military and jailed for being an evangelist. On his release, he had the chance of a lifetime: to leave for a race in Europe. It was his passport to freedom.

I met him, with his coach Giorgio Rondelli, in a bar on the outskirts of Milan. He was wearing the Italian national football shirt and sports sunglasses. His tall, elegant figure is almost regal. When he takes off the glasses, you can see there’s no shadow of desperation in his eyes, just determination.

We begin to talk in a hybrid language, a mix of Italian and English, on an afternoon with pollen coming down like snow.

How long have you been in Italy?

How did you get here?

By air, legally, with Eritrean documents to participate in a race in the Netherlands as an Eritrean athlete. But, after the event, I chose not to return home and I sought asylum. Not in the Netherlands, but in Italy. Now, however, I live in a limbo. I’m classed as an ‘article 15′: that is, I’m waiting for the hearing of my request for political asylum, which I filed in October. Then, if all goes well, I will be able to apply for a residence permit.

Why did you decide to apply for asylum in Italy?

In Milan I have Eritrean friends who I knew would give me a hand. And they have.

Did you leave family or friends behind in Eritrea?

My girlfriend and my parents. I miss them all. I wish my girlfriend could join me. I’m doing well here and there are some very interesting possibilities for my work. For the first six months I didn’t race. Then I met Giorgio Rondelli, my coach, and we now have a great relationship.

No one knew you were an athlete?

No, I didn’t tell anyone at first. Then, by talking to people I trusted, it came out and I started training with Giorgio. I regained my passion and desire to run and now it’s even stronger than before.

Do you have problems living here?

I still haven’t got official documents. They are waiting for the official status of political refugee. I’ve got room and board at a reception centre in Milan. Thanks to them I’ve got a visa in my pocket, so I can move freely around the city. The waiting-times are long and the process is complicated, but luckily I’m not alone. I have a strong reason to stay here: to run and win. I have found good people who are supporting me and I’m learning Italian.

So you need official documents to participate in an official competition?

Yes. I have to be a member of an official federation and for that I need a residence permit.

How do you feel? Are you happy or afraid of the future?

I’m not afraid. I’m determined. In my mind there is only running. I always say: Yohannes: just run! This is my future.

How do you train with Giorgio?

I train every day with a group of runners. In particular, with Marco, an Italian boy and Goran Nava, an Italian-Serb who made the Olympics. There’s a nice atmosphere and we share the same passion.

We say goodbye with a vigorous handshake. He starts his training and I stay for a few minutes to watch. Yohannes starts with three others and after 100 metres, he’s left them behind over a distance that, from where I’m standing, seems endless.