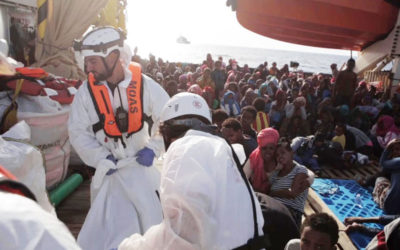 Eritreans attempting the crossing make the choice to flee poverty and repression under a dictatorship in the hope of a new life.

Early morning, 17 miles off the Libyan coast in international waters, and the crews with the Migrant Offshore Aid Station (MOAS) hear a ping on their ship’s radar.

Over the subsequent few hours a familiar scenario unfolds.

In darkness and on rough Mediterranean waters, the organisation’s purpose-built vessel, the Topaz Responder, manoeuvres towards the radar ping.

With the help of floodlights, the rickety wooden boat is spotted. It is dangerously overcrowded; easily more than 300 men, women and children, few wearing life jackets.

The rescue crew’s drill is now well-rehearsed. Two smaller and more manoeuvrable launches are deployed from the larger vessel and positioned alongside the wooden boat. One by one, people are counted off their wreck of a boat to safety.

Over more than an hour, 352 people were ferried from the smaller launches to the Responder vessel for medical checks.

But on board the fishing boat, three separate hold compartments were discovered. Inside them were four bodies and a number of other people in a critical state.

Most of the hundreds rescued said they were from Eritrea and had boarded the vessel in the Libyan town of Sabrath.

It is one of a string of towns along the Libyan coast where people smugglers operate with impunity.

The lower the price, the less safe the journey. The four who died in the hold probably paid less than those above them, who survived.

The smugglers charge extra for life jackets. Those who volunteer to pilot the vessel, regardless of experience, get a discount.

Testimony from those who do make the journey alive suggests that few have any idea how long the journey across the Mediterranean is, not to mention how dangerous.

But even if they did know the dangers, few would make a different choice because the danger of war, the threat of terror or the hopelessness of poverty has compelled them to cross the Sahara desert in search of a new life.

Eritrea, which is home for all of those on this boat, has a human rights record on a par with North Korea.

It is a totalitarian state whose dictatorial president, Isaias Afwerki, allows no dissent and no foreign journalists either.

So it is hard to empathise with those fleeing the place because we have not really seen how bad it is.

A 2010 US diplomatic cable revealed by Wikileaks gives a hint.

It read: ”Young Eritreans are fleeing their country in droves, the economy appears to be in a death spiral, Eritrea’s prisons are overflowing, and the country’s unhinged dictator remains cruel and defiant.”

The Italian coastguard, which operates in the waters alongside charities like MOAS, said the survivors were picked up in 35 separate rescues.

Figures from the Italian government show that between January and June 2016, 70,222 people arrived in Italy from the north African coastline including 11,608 children, of whom 10,524 were unaccompanied by an adult relative.

In the same period the previous year, the total was 70,329 – but the number of unaccompanied minors was less than half at 4,410.

The true figure will be higher as some bodies are never recovered.