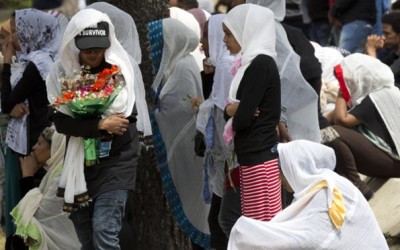 Funerals were held on Thursday for refugees who drowned in the Mediterranean’s worst-ever migrant disaster as European leaders prepared to discuss measures to stem the flow of those risking their lives to reach the continent.

Ahead of emergency EU talks in Brussels on Thursday afternoon, 24 coffins containing the only bodies recovered from the weekend capsizing that left an estimated 900 dead were laid out for an interfaith memorial service on the grounds of Malta’s main hospital.

Wails from members of Malta’s African community punctuated the ceremony, which included Christian and Muslim prayers and was attended by Malta’s president and prime minister, Italy’s interior minister and the EU’s migration commissioner.

The ceremony was held as a leaked draft of the summit statement seen by the Guardian revealed resettlement places in Europe would be offered to just 5,000 refugees – dashing hopes of search and rescue operations being fully reinstated.

Amnesty International’s UK director, Kate Allen, said: “Reinstating a proper search and rescue programme is not an afterthought, it’s the most urgent thing European leaders should be doing. As they scheme, men, women and children are drowning.

“In the face of the biggest refugee crisis since the second world war, the focus must be on the humanitarian emergency, not on plots to return people with asylum claims, to the very places from which they fled.”

A draft seen by the Associated Press pledges the 28 member states to “increase search and rescue possibilities” as well as to “undertake systematic efforts to identify, capture and destroy vessels before they are used by traffickers”.

David Cameron, the British prime minister, offered the Royal Navy flagship, HMS Bulwark, three helicopters and two border patrol vessels to support EU operations as he arrived for the summit on Thursday, but did not say if the ships would be used for search and rescue operations or an expanded border patrol along the Greek and Italian coasts.

He said those picked up by the ships would not have immediate recourse to claim asylum in the UK, but would be taken to the nearest safe country.

German army sources told the DPA news agency Berlin would offer to send the troop supply ship Berlin as well as frigates Karlsruhe and Hessen towards Italy. Belgium and Ireland each said they stood ready to commit a navy ship.

Speaking on arrival at the EU summit, German chancellor Angela Merkel said that Europe’s values and credibility in the rest of the world were on the line.

Italy shut down its search and rescue mission, Mare Nostrum – credited with saving the lives of more than 100,000 migrants – at the end of 2014 because other EU countries refused to pay for it. It was replaced with a smaller EU scheme – Triton – whose main focus is to patrol the bloc’s borders, after some countries argued that saving migrants encouraged more to come.

The International Organisation on Migration (IOM) fears that 2015 will be the deadliest year yet for migrants attempting to cross the Mediterranean as boats carrying desperate refugees become increasingly overloaded.

It said the number of arrivals in Europe is broadly the same but deaths are rising due to deteriorating conditions on board ships.

“More than 1,000 people died in less than 10 days and we are only at the start of the good season. It’s an emergency and it will get worse,” said Flavio Di Giacomo, an IOM spokesperson in Catania, where a vessel belonging to the Italian Guardia di Finanza on Thursday brought 220 migrants, including four pregnant women, into port.

“If the migrants are scared before boarding and refuse to travel, they are beaten by smugglers and forced to board,” Di Giacomo said. “Once you pay, there’s no going back. Boats are increasingly showing problems shortly after departure, when they are still in Libyan waters.”

3,200 migrants drowned in 2014 – the deadliest year to date – but 1,700 deaths had already been recorded so far in 2015, Di Giacomo said. “The top priority now is saving lives, from this evening, from tomorrow. This means reinforcing the life-saving mechanism. Similar to Mare Nostrum, but in a European context.”

According to figures published by a Rome newspaper on Thursday, the Italian interior ministry estimates that as many as 5,000 migrants a week could arrive in Italy by sea from north African ports in the next five months.

A ministry source confirmed the figures, which estimate that as many as 200,000 could arrive by the end of this year.

European leaders have been widely criticised since the decision last year to end the Italian navy operation. The UN reiterated the criticism on Thursday and urged the EU to do more. “The European Union response needs to go beyond the present minimalist approach … which focuses primarily on stemming the arrival of migrants and refugees on its shores,” it said in a statement.

Cameron has acknowledged that there has to be an extension of the search and rescue operations after they were scaled back but insisted in Brussels that other measures must follow too.

“What we are dealing with here is a real tragedy in the Mediterranean. Today’s meeting has to be about saving lives. Now saving lives means rescuing these poor people but also means smashing the gangs and stabilising the region,” he said.

“Britain, as ever, will help. We will use our aid budget to help stabilise neighbouring countries. As the country in Europe with the biggest defence budget we can make a real contribution. Of course it must be under the right conditions and that must include that people that we pick up are taken to the nearest safe country – most likely Italy – and do not have immediate recourse to claim asylum in the UK.”

The summit comes as a joint letter to EU leaders signed by more than 50 former European prime ministers, foreign ministers and business leaders, condemned the death toll of migrants in the Mediterranean as a “stain on the conscience of our continent”.

Patten said: “Today’s crisis summit must be clear on its first and most urgent priority, increasing search and rescue back to at least previous levels.

“Addressing the drivers of migration, from conflict to human trafficking, climate change to human rights abuses is also critically important but will take a longer term strategy to address. My message to EU leaders is clear – history will judge you harshly if you fudge this.”

Sunday’s capsizing off Libya was the Mediterranean’s worst migrant disaster with up to 900 dead.

An official list of the wreck’s 26 survivors, released by Italian authorities on Thursday, reflected the geographic diversity of the migrants who had been on the stricken boat – 12 of the survivors were from Mali, four from Eritrea, three from Bangladesh, two from Senegal, two from Somalia and three from Sierra Leone, Gambia and Ivory Coast.

Tens of thousands of Eritreans trying to start from scratch each year in Europe. To do face a dangerous journey across the Mediterranean Sea, in many cases, ends with death. However, despite the high risk, the flight seems to be better to get trapped in this impoverished country in the Horn of Africa ruled dictatorially alternative.

According to the United Nations High Commissioner for Refugees (UNHCR), Eritreans are the second nationality of migrants and refugees fleeing their country in flimsy boats, behind only the Syrians.

”The main cause of their flight is the incredible repression of all freedoms holding the government,” says Leslie Lefkow, deputy director for Africa of the humanitarian organization Human Rights Watch. In Eritrea there is no opposition as such as there is no independent media and civil associations.

For years, thousands of dissidents met prison in terrible conditions. The US State Department accused the country of kidnappings, torture and assassinations of opponents, among other crimes.

President Isaias Afwerki has ruled the country with an iron fist since 1993, when Eritrea became independent from Ethiopia. So sometimes it is qualified as ”African Korea North” for its resemblance to the dictatorship of Kim Jong-un. And is that Eritrea is also virtually isolated: no independent voices in the country, the international media can not send reporters and is very difficult to get a visa. Even the UN special envoy to check the situation of human rights Sheila B. Keetharuth could enter the country.

Last year, one in five refugees who arrived by sea to Italy came from Eritrea. According to UNHCR, the total figure was 34,300. And the situation in Greece is similar. Once they reach European shores, Eritrean asylum seekers especially in Sweden, Germany and Switzerland. According to the German immigration authorities in 2014 applied for asylum in the country 13,200 Eritreans, surpassed only by the Syrians (39,300) and Serbs (17,200).

They are mostly young people who they escape to Europe. And among the reasons the military has a special weight: Eritrea obliges all its citizens, without exception, to be 18 months of armed service. However, many are held for years against their will, something that humanitarian organizations qualify as modern slavery. ”That’s one of the great causes of the exodus from Eritrea,” Lefkow said. ”A little recruits are paid and often mistreated.”

In fact, slavery and forced labor are prohibited in Eritrea. But according to the US State Department, since 1998 there is a law that allows skipping the law because of the war with Ethiopia, at that time the state of emergency was declared.

The Eritrean government considers the massive flight from the country with cynicism. Says young people and critics leave the country, helping to stabilize the regime, and welcomes how many refugees regularly send money to their families from abroad. Furthermore, according to the UN, the government imposes a ”diaspora tax” of 2 percent revenue refugees, either through embassies, illegal collectors or during a possible visit home.

In addition to political repression, among the motives behind the Eritreans to flee poverty figure also living engulfed the country. According to Development Index of the United Nations, which includes factors such as health or schooling, Eritrea is in fifth place in the world ranking. According to the International Monetary Fund (IMF), the GDP of this country of six million inhabitants in 2014 stood at about $ 4 million (for comparison: the German was about 3,800,000 million).