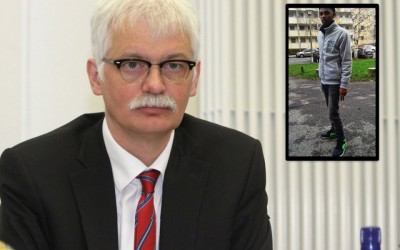 Dresden – Dresden prosecutor has ruled on the death of the applicant Khaled Idris (20). Here is the original, which was received at 17:26 clock MOPO24. Posted by the speaker of the prosecutor sheep Dresden, Attorney General Lawrence Haase (54):

”The 20 year old Eritrean died a violent death, today’s post-mortem examination of the 01/13/2015 found dead 20 years of Eritrea has revealed that he has come through multiple stab wounds in the neck and chest to death.

The man was found yesterday against 7.40 clock in Dresden at the John Paul Thilman-road dead. Passers-by discovered the body and called the police.

The dead man is a 20-year-old asylum seekers from Eritrea, who lived in the area.

The Dresden prosecutor has launched investigations of manslaughter.

The homicide of Dresden police was increased to 25 officers. The investigation focused on interviews with residents of the 20-year-olds. Forensic scientists have taken up the clues and assurance in the home, at the site and in its environment. A possible murder weapon has not been able to be ensured.

Are used also special dogs. They are used to Scanning for traces. The aim is also to create a moving picture of the 20th.

Also continued the investigation into Wahrnehmbarkeitsbereich. Investigators search for clues to a possible conflict. Also of interest include video recordings in public transport and possible whistleblower in an adjacent shopping market.

The Dresden Homicide examined witnesses, who can supply information on the course of action. Notes takes the police headquarters in Dresden at the phone number (0351) 483 22 33. ”